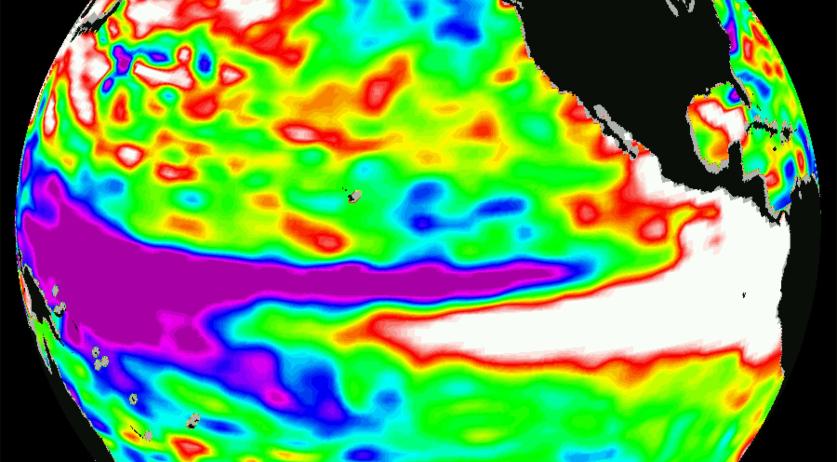 A new El Niño could be on the way, causing worldwide changes in the weather pattern. It is expected that the water in the Pacific Ocean will warm up quickly in the coming months, which will bring about a noticeable effect, meteorologists announce.  The effects of El Niño can be devastating. A powerful El Niño can last longer than a year and lead to heavy damage and many victims. This weather pattern can develop in the coming months, where the effects can become noticeable towards the end of this year. Weatherman for the NOS, and climate researcher Peter Kuijpers Munneke says that “meteorologists are keeping the Pacific Ocean under close watch the coming months to see if the warming up of the sea water will indeed grow into an El Niño.” El Niño is the name for the warming up of water in the tropical part of the Pacific Ocean, from the coast of Peru to Indonesia along the equator. There will be changes to the wind direction and the (passaatwinden), as well as the temperature of the ocean. This phenomenon affects the weather on a global scale. In South America, there is a high risk of heavy rainfall causing flooding and landslides. In South East Asia and Australia, heat waves and long bouts of dryness increase the likelihood of devastating forest fires. The last El Niño was in 1997-1998. It killed 23,000 people and caused €30 billion in damage. More than 60 countries were affected. Floods happened in 41 countries and drought in 21 countries. For The Netherlands, however, an EL Niño would not bring about natural disasters of biblical proportions. Instead, Spring in 2015 will be extra rainy.