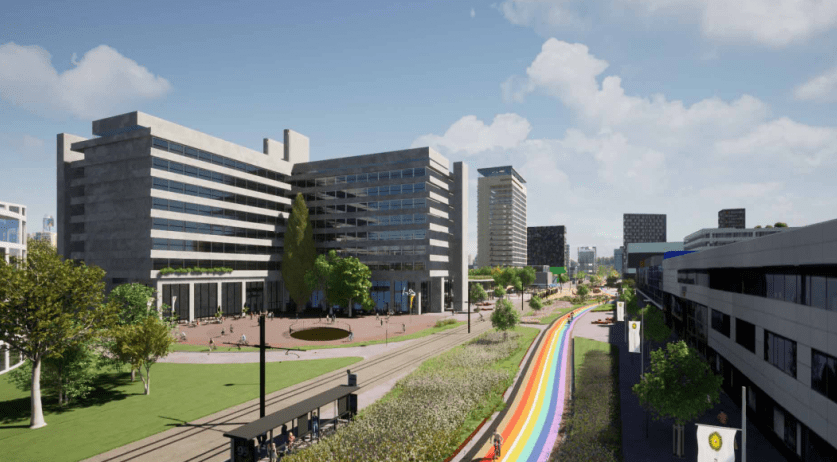 Video: Utrecht to get the world's longest rainbow bike path

Utrecht is getting the longest rainbow cycling path in the world following an initiative of 22-year old student Elias van Mourik. The 570-meter long cycling path will be located in the Utrecht Science Park, Utrecht University announced.

"A lot of people live, work and study in the Utrecht Science Park. It's therefore great that at such a location you get a symbol that shows that everyone is accepted," Van Mourik said.

The idea from the 22-year old student received immediate support from Melody Deldjou Fard, a city council member for GroenLinks. "I thought it was a great idea. The future of our country is taking shape in the Utrecht Science Park. And that's exactly why it's important to make diversity and inclusion explicitly visible here," she said.

The two decided to write an open letter to Utrecht University and the University of Applied Sciences Utrecht after finding out the municipality could not fund the project. The two higher education institutions later teamed up with the UMC Utrecht hospital to carry out the project together.

Even though the rainbow flag is primarily a symbol of the LGBTQI+ community, all parties involved in the initiative want the bike path to send a message about diversity and inclusiveness in the broadest sense possible. "We want to show that everyone can be themselves and everyone is welcome in the Utrecht Science Park," said Elena Valbusa, Diversity Officer of University of Applied Sciences Utrecht.

"Everyone, so regardless of your color, sexual orientation, cultural background, but also regardless of your disability or your parents' income. We prefer to look at the human being, with everyone's own talents and qualities and how we can develop them further," she said.

The future cycling path will begin near Padualaan 97, traversing along the bus route to the three-way intersection of Heidelberglaan, Universiteitsweg and Bolognalaan. That is the next to the administrative building of Utrecht University.

The project’s 22-year old initiator was hopeful it will also inspire others to also actively contribute to diversity and inclusion.