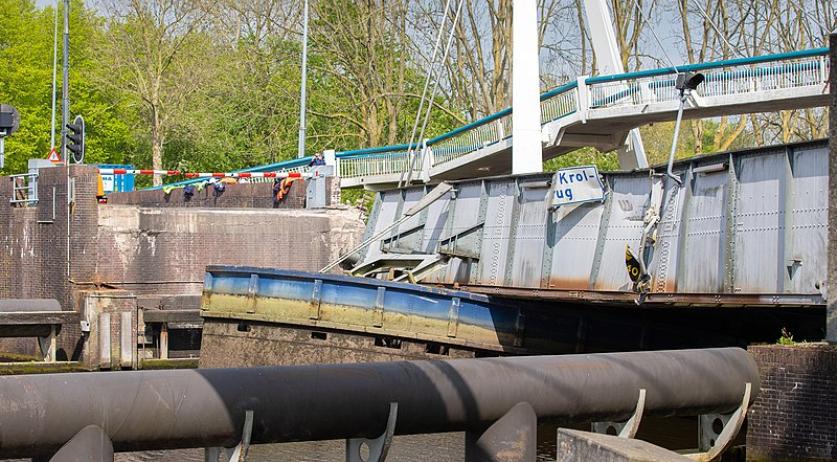 Gerrit Krolbrug in the city of Groningen after the incident. 15 May 2021. - Source: Laurensvanheerde at WikiMedia Commons - License: CC-BY-SA
Weird
1-1-2
Groningen
bridge
freighter
Share this:

The repairs to the Gerrit Krolbrug bridge in Groningen have been delayed due to the Public works department Rijkswaterstaat facing unexpected setbacks in the process. The bridge was heavily damaged in the overnight period from Friday to Saturday when a freighter from Germany struck it, NOS reported.

Since then, the bridge could no longer be operated, keeping an important shipping route between Amsterdam and Germany blocked. About thirty ships are waiting for the repair to be completed. At the time of the incident, a scooter was also driving over the bridge and the driver was slightly injured.

One of the skippers whose journey has been interrupted told NOS that apart from waiting for the repair, the only other solution is to circumnavigate via Germany. "That's a three-day detour. We won't do that either," he said.

The Czech skipper of the German freighter was interviewed by the police on Saturday. He was not under the influence of alcohol or drugs during the collision. Two police reports were filed against him.

"The relocation of the affected Gerrit Krolbrug in Groningen is delayed. The instability and age of the bridge is causing trouble for us. The bridge is acting differently than expected. We aim to safely open up waterways and walkways during the day", Rijkswaterstaat had tweeted earlier on Monday.

Later, it was no longer expected that pedestrians and cyclists will be able to use the bridge again by the nighttime hours.