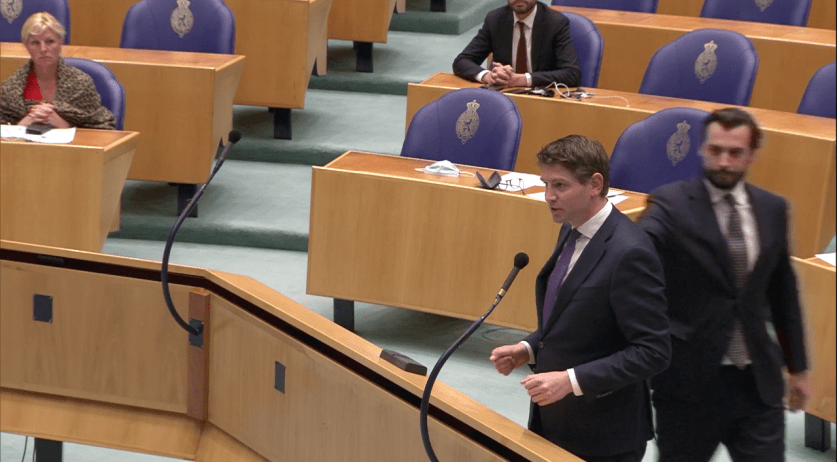 Parliamentarians Wybren van Haga, Olaf Ephraim and Hans Smolders said they are leaving far-right nationalist political party FvD due to the manner in which the party is operated. The three will keep their seats in the Tweede Kamer and form their own party instead.

It will immediately knock FvD out of the eight largest parties in the Tweede Kamer, dropping their seats in the lower house of Parliament from eight to five. While the three said that they were on good terms with the FvD despite their decision, it followed two weeks of simmering issues between Van Haga, the party's number two vote-getter, and party leader Thierry Baudet.

"Recently, a difference of opinion has arisen within the FvD faction about the way in which politics is conducted," Van Haga, Ephraim and Smolders said in a press release.

Baudet said in Parliament earlier on Wednesday that he refused to get tested for the coronavirus, despite experiencing symptoms that could indicate infection. "I had the flu. With a fever. Maybe the ordinary flu, maybe the corona flu. I don't know," he told reporters. He also confirmed he attended an April 15 wine tasting event with several other party members who later tested positive for the virus about the same time Baudet was ill.

Later, when Van Haga was at the podium in the Tweede Kamer, he was debating with D66 MP Jan Paternotte about Baudet's refusal to get tested for the coronavirus infection, and that Baudet was at risk of infecting colleagues and staffers in the building. Both Van Haga and Baudet stepped in to dismiss Paternotte's concerns. Van Haga called coronavirus a "dangerous virus" that causes a "severe flu", and Baudet, who earlier also referred to it as a flu, said his party members do not show up for work when they are symptomatic.

Baudet, then walking away from a microphone, slapped Paternotte on the back, in violation of coronavirus rules. This angered the D66 MP, and parliamentarians from many other parties. Van Haga later apologized for Baudet's conduct.

One week earlier, Van Haga also distanced himself from Baudet and the FvD after the publication of a controversial Liberation Day poster FvD co-produced. The poster suggested that Dutch social and political policies meant to slow the spread of coronavirus were comparable to the occupation of the Netherlands by Nazi Germany during World War II. It proposed mourning the death of freedom on Liberation Day due to lockdown restrictions, as opposed to celebrating the 76th anniversary of the country's liberation from Nazi occupation.

"It's an incredibly painful experience for a lot of people. As far as I am concerned, it was totally unnecessary to rip open such painful wounds," Van Haga said during a committee meeting in Parliament.

"The original election program remains our leading point in the parliament and the interests of all Dutch still come first," the three departing FvD MPs said in their Thursday statement.

"At a time when the FvD is the only true opposition party in the Tweede Kamer and the only voice against the current devastating Cabinet policy, joint action under a new name, in our opinion, definitely had better alternatives, in the interest of the country, our members and our voters. But of course, they are free to decide," FvD stated in response. 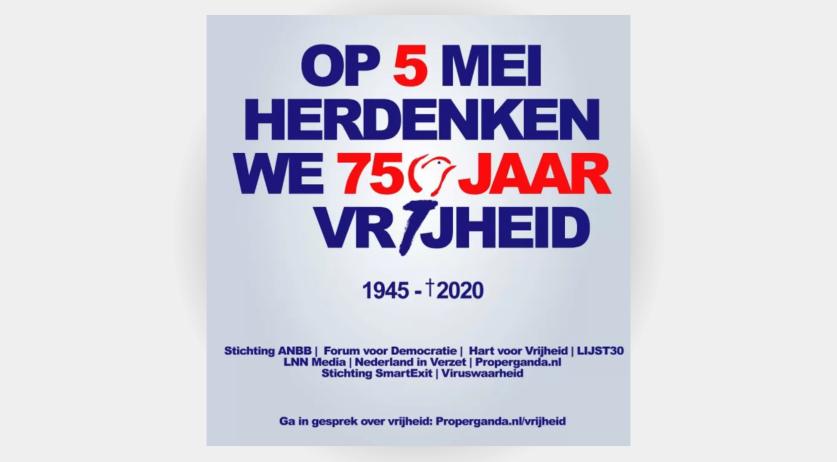 A controversial poster image from far-right political party FvD and others saying that freedom gained during WWII died in 2020. 2 May 2021 - Source: ANBB Vereniging at Twitter