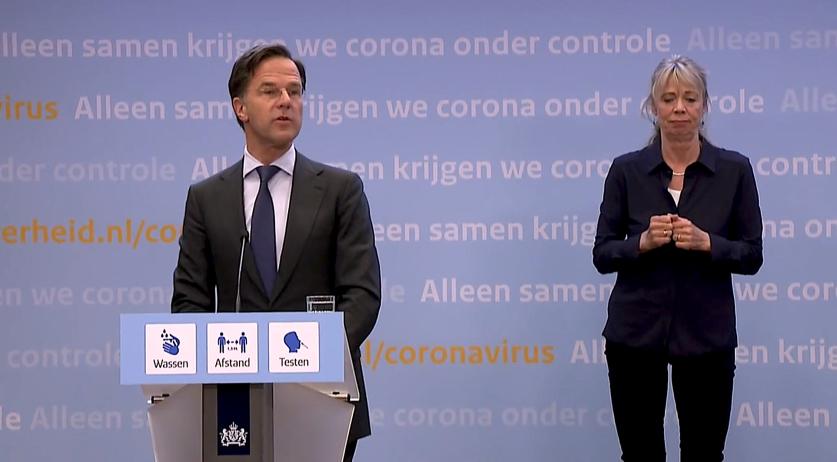 The caretaker Cabinet of the Netherlands has decided to move forward with the second step of its lockdown relaxation plan on May 19, but only if the average number of daily Covid-19 hospital admissions drops about 20 percent below the third wave peak. Additionally, from May 15, the country's global negative travel advice will be withdrawn, and will be replaced with individual warnings for countries and regions.

The second step will include opening gyms, sports halls, swimming pools, and will allow for more group exercise activity outdoors, Prime Minister Mark Rutte and Health Minister Hugo de Jonge confirmed at a press conference Tuesday night. For indoor sports, group sizes will be limited to two, with a maximum of thirty people per space. Outdoor sports groups will be permitted for adults.

Sex workers and other contact professions still closed will also be allowed to reopen their doors. Cafe terraces, including outdoor seating at sports canteens, will be allowed to open from 6 a.m. to 8 p.m., instead of the current opening hours of noon to 6 p.m.

"The open-air theaters, open-air museums and other cultural institutions out in the open will also open again. Indoor spaces, where people take part in art themselves, will also open again, such as music and dance schools," Rutte said. Outdoor portions of zoos and amusement parks will be allowed to open, but they will have to keep indoor areas closed. Reservations for these will be required.

A stated goal of Education Minister Arie Slob is to reopen secondary schools fully before the end of May. A decision on this will be given before May 25. "The OMT warns against letting go too soon, because this leads to long-term pressure in care," he said. "A factor in the schools is that if you go too fast, it will be at the expense of a group that is vulnerable. So that people in their 40s and 50s become ill through their children."

The OMT advice calls for daily hospitalizations for Covid-19. Current data from the LCPS shows that to be about  263 per day, with the target then being 250. "The expectation is that sometime this week we will see the decrease of 20 percent in the hospital figures. That is why the positive decision, with an emergency brake. If it is disappointing, we will press the pause button on Monday. Whether or not to relax does not depend on one percent more or less. In that case we will dare to take the step anyway," Rutte said.

He also pointed out that in order to continue to move forward, people still need to follow the basic coronavirus rules related to hygiene and social distancing. "In Amsterdam alone, seventeen large clusters have been found with infections that can be traced back to King's Day. It concerns dozens of people," he said.

"There is a great need for more space, but also great concern about the effects of relaxation. That is precisely the dilemma we are dealing with as a Cabinet."

A press conference on June 1 will also be held to announce if step three of the plan will go forward.

Travel plans get a green, yellow, orange or red light

As expected, De Jonge also said that the negative advice regarding international travel will be allowed to expire on schedule on May 15. From then on, the Ministry of Foreign Affairs will return to announcing travel restrictions based on a system of four colors, where green represents no threat, yellow denotes some restrictions, and orange is for only urgent or necessary travel. People are told not to travel to a region marked as red under any circumstances.

"We are cautiously optimistic about this, especially in Europe. More and more countries can become a safe holiday destination," De Jonge said. Already, many islands in Greece and Spain require no quarantine when returning to the Netherlands. Those entering the Netherlands from Portugal also do not have to present a negative coronavirus test before travel.

"If a country is set to yellow, you can in principle go there on holiday, but you have to adhere to the rules of that country," he said. "Keep in mind that other countries may see the Netherlands as a high-risk country, so you may have to be quarantined."