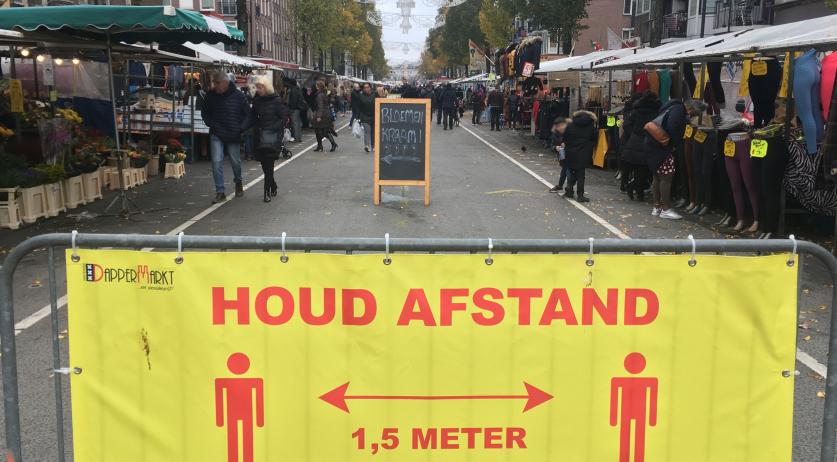 A sign in front of the busy Dappermarkt in Amsterdam Oost reminding people to keep a safe distance from each other. 11 November 2020 - Source: NL Times at NL Times
Health
reopening
Coronavirus
coronavirus measures
lockdown
Share this:

55% of Dutch think lockdown relaxations should be paused; Distress over vaccine process grows

More than half of the Dutch population think the current coronavirus restrictions should freeze or be tightened up, an analysis carried out by I&O Research and broadcaster NOS showed. General support for the coronavirus policies has once again decreased, going down from 61% in March to 56% now, driven largely by their dissatisfaction with the vaccination policy. Half of participants described the vaccination process as either not good enough or bad.

However, the general population's willingness to receive a jab remained fairly high, with three quarters of non-vaccinated residents stating they intended to receive the vaccine in the future. Out of those, 80% said they were most likely to opt for the Pfizer vaccine, and less than a half surveyed said they would accept the AstraZeneca vaccine.

According to researcher Peter Kanne, the numerous reports about ICUs across the country being strained prompted 34% of respondants to say that no further relaxations should take place, and another 21% to advocate measures being tightened up again.

"Many people feel that this is happening under pressure from public opinion and that the threat of 'code black' could have been prevented if measures had been tightened earlier," said Kanne. Some 28% of polled participants said they wanted the gradual easing of the measures to continue, and 13% preferred to see all restrictions abolished.

Supporters for the further reopening of society believed that the strict lockdown was no longer tenable. In their view, easing the current measures was essential for the well-being of young people and entrepreneurs in particular.

The research showed that people are mainly in favor of enforcing the basic rules such as social distancing or mandatory face masks. About 80% of surveyed participants stated that they prefer not to let go of these restrictions in shops or public transportation for the time being. Additionally, seven out of ten Dutch people think reopening the shops is a good step. Just over half supported the reopening of terraces in April.