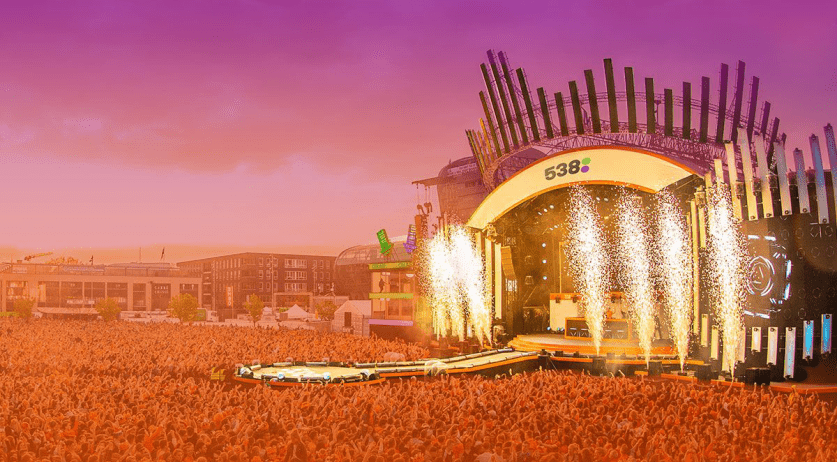 A rendering of the 2021 edition of the 538 Oranjedag event set for 24 April - Source: Radio 538 at Radio 538
Health
Politics
Fieldlab
fieldlab experiment
538 Oranjedag
Breda
Share this:

Fieldlab program manager Pieter Lubbert said in the TV program Beau on Monday it was a bad decision for the mayor of Breda to refuse a permit for 538 Oranjedag, an event that was expected to draw ten thousand festival attendees. It would have been the largest Fieldlab experiment to date, but Mayor Paul Depla denied the permit over public pressure and the belief that many lockdown protestors and counter-protestors would show up on the day of the event.

The experiments organized by Fieldlab are part of a pilot program to determine how different sectors can safely reopen during the coronavirus pandemic. Before Depla effectively cancelled the April 24 event, organized by Radio 538, an online petition calling it an irresponsible festival was signed by over 350 thousand people.

"We had not counted on that. As Fieldlab we are working on something that we believe is important and good for society. We are disappointed and it feels like a missed opportunity for our research. But also for Radio 538 and Depla," Lubbert said.

Zuyderland Hospital board chair David Jongen was also part of the panel during the television show. He said that he was happy with the decision and called the canceled gathering ‘a waste of money'. He argued that the 925 million euros the government invested in various Fieldlab events could have better been used to speed up the Covid-19 vaccination process.

Though the event caused controversy and prompted a widely-circulated petition against it, over 1.2 million tickets were requested for the concert. Dutch DJ Armin van Buuren was among those set to perform. The Cabinet was unwilling to step in, leaving the final decision to the municipality. On Monday afternoon, Depla issued his statement which put an end to the event.

“As mayor, I stand for the safety of the police officers, local residents and the event’s visitors. I regret it, but on the basis of this information I cannot grant a permit for 538 Oranjedag on April 24 at the Chasséveld”, he said.