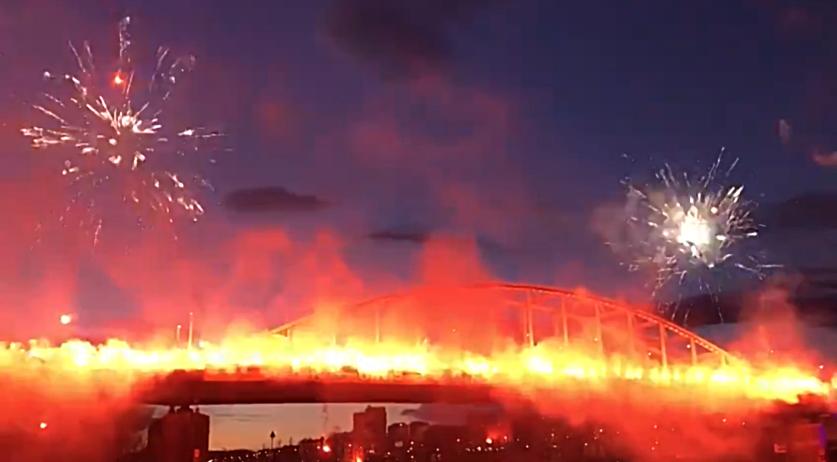 Vitesse has distanced itself from the group of fans who chanted anti-Semitic slogans on the John Frostbrug in Arnhem on Wednesday. The rally was held in support of the Arnhem club, which plays Ajax in Sunday's cup final.

Vitesse Arnhem fans with pyroshow before the Dutch Cup final with Ajax, which will take place next Sunday. pic.twitter.com/OtnMU6ds2M

Witnesses and reporters covering the rally said that very large groups of Vitesse supporters chanted in Dutch, "Hamas, Hamas, Jews to the gas!" referring to the extermination of millions of Jewish people during World War II. Ajax has long been viewed by some as a “Jewish” team because the team is based in Amsterdam, though it has never actually had an affiliation with any Jewish organization. Anti-Semitic chants targeting Ajax and its fans, who sometimes refer to themselves as "Super Jews", have gone on for decades.

”It is sad that a small part of fans were unable to behave,'' Vitesse club manager Pascal van Wijk said in a statement. ”We firmly distance ourselves from this, and not just us as a club. The vast majority of supporters who showed their best side on Wednesday evening also fully agree with this. They have openly condemned the behaviour of the individuals”, van Wijk added.

Three years ago, Vitesse banned a half-dozen supporters for similar chants before a match at home against Ajax. That case was referred to the police for investigation, Omroep Gelderland reported.

"Make us proud. Show them who we are," was written on a 120-meter-long banner which fans unfurled on the bridge. Many supporters said the atmosphere was great until the anti-Semitic chants began. Fans lining the bridge lit flares and torches, set up fireworks, and flew brightly lit drones in coordinated patterns.

The final game of Dutch football cup between Ajax and Vitesse will take place on Sunday at 6 p.m. Due to the coronavirus restrictions, the match will be played without spectators. Vitesse is eyeing its second cup win in the club’s history, having bested AZ Alkmaar in 2017.