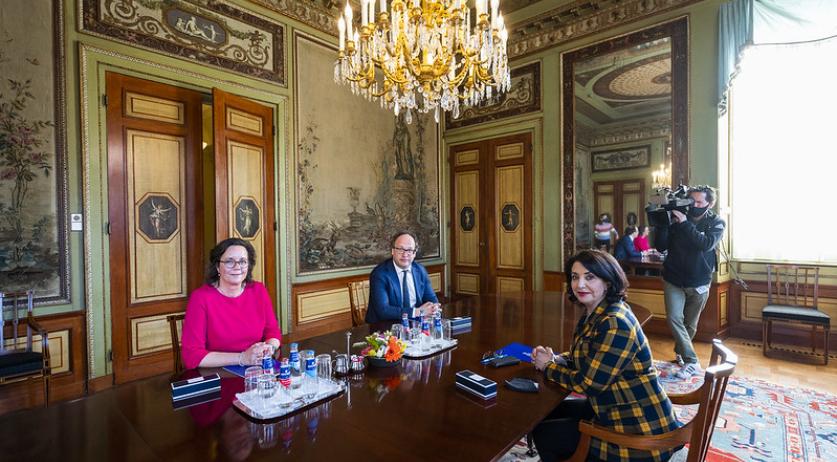 The Dutch cabinet formation process is restarting on Friday with Tamara van Ark (VVD) and Wouter Koolmees (D66) as the new "pathfinders", whose job is to talk to the various party leaders and map out possible coalitions. Annemarie Jorritsma and Kasja Ollongren stepped down as pathfinders on Thursday, after a photographer managed to get a photo of agenda points for a discussion with the VVD and D66 leaders, ANP reports.

On the notes, which was photographed as Ollongren was carrying them, CDA parliamentarian Pieter Omtzigt was mentioned with the note "function elsewhere". There were also notes about CDA leader Wopke Hoekstra's negotiation tactics. This led to a great deal of outrage and indignation.

The PVV, PvdA, SP, and PvdD all demanded a parliamentary debate on the matter. CDA leader Hoekstra said that this "seriously damaged" trust in the process.

On Thursday evening, VVD leader and current prime minister Mark Rutte said that he and D66 leader Sigrid Kaag definitely did not discuss Omtzigt, who got over 300 thousand preferential votes in the parliamentary election last week and is known for his tenacity. "It's very annoying what happened here," Rutte said to NOS. "I also had some contact about this with Sigrid Kaag tonight, so I can also say on her behalf that we in any case did not talk about Pieter Omtzigt in our conversations."

To clear the air, new pathfinders Van Ark and Koolmees will again meet with the leaders of all 17 parties in parliament. That will be somewhat complicated, as some of them are in quarantine because they had close contact with Ollongren, who tested positive for the coronavirus on Thursday.

The goal was to have the pathfinder part of the formation process done by Tuesday, so that parliament could debate it on Wednesday. But the expectation is that this deadline will not be met. Koolmees and Van Ark will give an update on their progress on Tuesday.