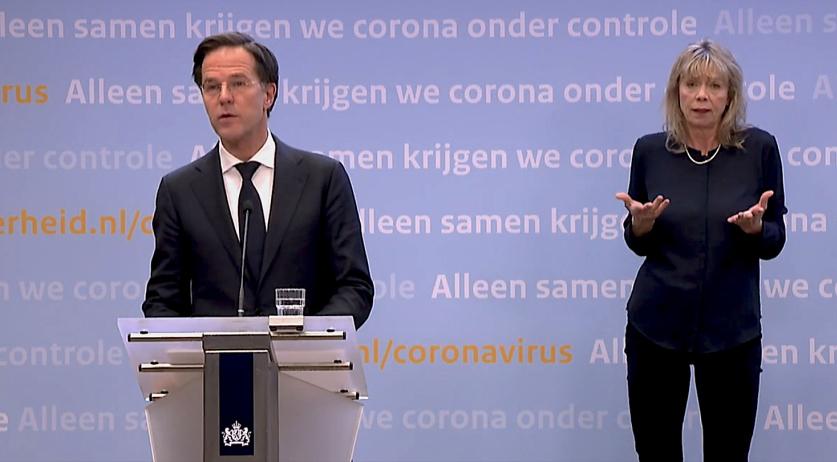 During the 75-minute press conference, Health Minister Hugo de Jonge also discussed the vaccination situation in the Netherlands, saying that most people between 18 and 49, and many in their fifties, will not have access to a Covid-19 vaccine until June.

The current lockdown in the Netherlands, including closed after school care and universities, and prohibitions on serving customers at bars and restaurants, will be extended to April 20. Higher education students will be able to attend at least one day of classes per week starting April 26. The country is currently at a crossroads, Prime Minister Mark Rutte said during a press conference, where either stricter measures or a relaxation of the lockdown is imminent.

With that, the Netherlands also will extend its negative travel advisory until after the May vacation period, which lasts until May 9. No update was given on the summer holiday season just yet, but Rutte noted the growing number of infections and strict lockdown measures in many European countries. Discussions were ongoing about a new law forcing international travelers into quarantine when they arrive in the Netherlands.

"Two weeks ago, we hoped to be able to implement minor easing before Easter, including limited opening of terraces, more space for shops and a partial reopening of education," Rutte said. "The better times will come when people with fragile health and people over sixty will soon be vaccinated. That is a time when more is possible," he continued.

Since the last evening news briefing with Rutte and Health Minister Hugo de Jonge, the daily average of coronavirus infections has surged by 45 percent. The virus is spreading to more people at a faster rate, and over the past week, a higher percentage of those tested for the infection were given a positive diagnosis.

"It may become necessary that even more stringent measures are needed." That all depends on how strictly people adhere to the current rules in place, Rutte said.

The next press conference between the two will take place on April 13.

For the time being, all lockdown measures will remain in place. The only significant change, Rutte said, is that the mandatory nightly curfew will begin at 10 p.m. instead of 9 p.m. starting on March 31. It will still continue through 4:30 a.m. the following morning.

The reason for the change is that more people want to take advantage of the increasing amount of daylight hours. On top of that, Ramadan will begin in mid-April, with those taking part in the religious holiday breaking their fasts every night at sundown, which will take place after 9 p.m. later next month. However, Rutte said the curfew will not be adjusted to facilitate religious gatherings of any kind.

There will be a million people in the Netherlands who will want to visit family to break the fast, Rutte said. "That is complicated for many people. Let's hope the numbers have improved by then, so that maybe some easing is possible."

In a debate in Parliament when the caretaker Cabinet attempted to win political support for the curfew, Rutte said that the curfew would only be effective if it begins by 9 p.m. On Tuesday, he responded to a question about that by saying, "Our advice is 10 pm. It is less effective, but still effective. It still makes sense."

Higher education students can return only with "access testing"

Students at universities, applied sciences universities and vocational institutes will be able to return to classrooms for one day each week starting on April 26, De Jonge said. This will only be possible for students who produce a negative result on a rapid antigen test, which may be taken at home, and who have produced a recent negative test at a special testing center.

De Jonge refers to the latter as an "access test" because it will be used as a way to gain entrance into a non-essential location. The testing regimen will be a critical in determining "whether we can let go of the reins," he stated.

The decision was almost immediately praised by the association of applied sciences universities (VH). "It is good that the cabinet is showing its ambition to further open up physical education at higher professional education as of April 26. Students yearn for that. If the use of self-tests can help, we welcome that," said Maurice Limmen of VH to broadcaster NOS.