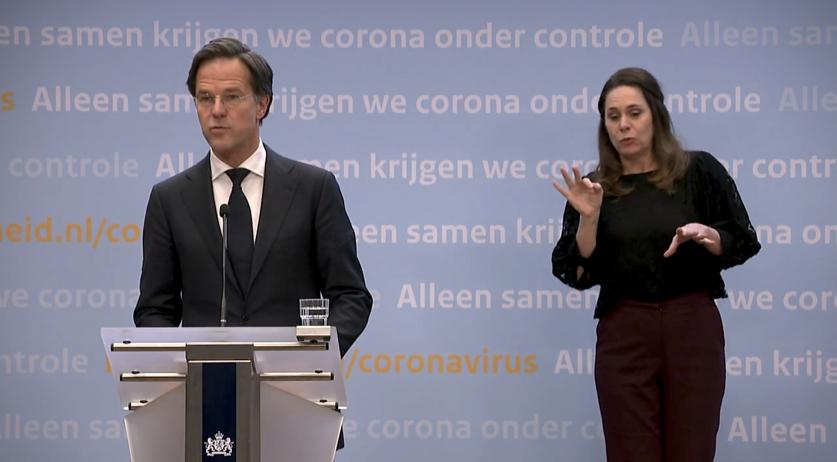 Rutte: Current lockdown will be gone by July; Terraces could reopen March 31

Dutch Prime Minister Mark Rutte said that many aspects of normal social life will return to the Netherlands at the end of the second quarter as the country's vaccination program ramps up. Rutte said that if everyone who wants to be vaccinated gets at least their first shot by the beginning of the summer, "then that is the moment when we can finally take big steps towards normal life again."

"If all goes well, we will really have to say goodbye to most of the measures in the summer," added Health Minister Hugo de Jonge. He wants everyone to have access to at least a first vaccine dose by June 1.

During a press conference with De Jonge, Rutte confirmed on Monday that adults from 27 years of age and up will be permitted to exercise in groups of up to four people provided they keep a distance of 1.5 meters from each other and they are working out at a sports facility. This does not include public parks. Children will also be allowed to return to indoor pools for swimming lessons to obtain their A, B or C diplomas for the first time in three months as long as they are not showing even minor symptoms of a cold or flu. More advanced swimmers will not get to dive back into the deep end.

The relaxation of those restrictions will take effect on March 16. The Cabinet also agreed that some stores in the Netherlands will be allowed to serve customers in person starting on March 27 based on the size of the store instead of an arbitrary maximum of two customers. One customer per 25 square meters will be allowed in ten-minute time periods, if the appointments are made four hours in advance.

Additionally, cafe terraces could be permitted to reopen on March 31 if the basic reproduction (R) number of the virus is below 1.00 at that time, meaning that 100 people contagious with the coronavirus infection pass it on to fewer than 100 others. Likewise, higher education students could be allowed to return to classrooms once per week around that time provided they present a negative result from a rapid coronavirus test.

More restrictions could be relaxed faster if vaccines are given out more quickly. The Netherlands launched this week an ambitious plan to increase the number of facilities where jabs are provided with a goal of administering 1.5 million doses per week in May.

Currently, that figure is below three hundred thousand, and he country has given just over 1.6 million shots over the past two months. This could also increase if the Netherlands follows the advice of the Dutch Health Council, which said earlier in the afternoon that people who tested positive for the SARS-CoV-2 infection less than six months ago only need one Covid-19 vaccine shot even when two is needed for maximum efficacy. This is because of their ability to produce more antibodies more quickly, the independent advisory board said, citing three academic articles published in The Lancet and JAMA.

A new app called CoronaCheck could also provide more flexibility, especially for events. The app will allow people to register a recent negative test for the viral infection, or proof of their vaccination status, in the app. The user's status in the app could allow that person to access non-essential locations and events as early as May.

"The first results are really encouraging," De Jonge said. However, the use of personal data will require a change in Dutch law, which could be complicated by the results of the national election next week.

"We will only [launch the app] when we are sure that as a vaccinated person you no longer play a role in the spread of the virus," he concluded. He confirmed that test capacity will be expanded by a further 100 thousand per day from April just to give people a chance to get a negative test result to use for accessing events. This will scale up to 400 thousand per day.

As expected, the Netherlands will also extend its advice against unnecessary travel until April 15.

"The urgent advice remains: stay in the Netherlands, don't travel," Rutte said. More information about whether or not people can travel abroad for the May vacation period, or for the summer holidays, will be given during a press conference on March 23.

Shortly before the press conference, the Cabinet revealed that it was seriously examining a forced ten-day quarantine for travelers entering the Netherlands from regions where there is a higher risk of acquiring a coronavirus infection. A negative coronavirus test after five days in isolation would allow people to leave quarantine early.

The government noted that other European countries have such an obligation, but it the Netherlands this is considered non-binding and urgent advice. "Research shows that travelers do not adhere to the quarantine rules," the Cabinet wrote in a statement. It said the public could submit comments on draft legislation until Friday. No details about enforcement of the quarantine were revealed.

Rutte said relaxing these rules were "corrections" to existing policy and not in opposition to Outbreak Management Team advice not to ease restrictions at this time. "Actually, we already started doing this two weeks ago, with the partial reopening of education, opening the hairdressers, simply because we see that it is increasingly difficult for many people to keep their chins up."

Rutte also confirmed that the curfew in place from 9 p.m. to 4:30 a.m. every night will be extended through at least March 30 along with all other coronavirus restrictions. Election monitors, civil servants, ballot counters and voters going to and from their polling place will be exempt from the curfew during the national election being held from March 15 - 17.

The country's lockdown was ordered in mid-December when an average of 8,300 people were testing positive for the SRS-CoV-2 coronavirus infection per day. That quickly rose to about 12 thousand, but over the past three weeks the average has held at about 4,500.

"It is great that we have been able to reduce it from [a high of] 13,000 infections to about 5,000. But it is a very tenuous situation. The OMT therefore warns us: do not take irresponsible risks, because before you know it you will be in a situation in which the worry is screeching overloaded," De Jonge said.