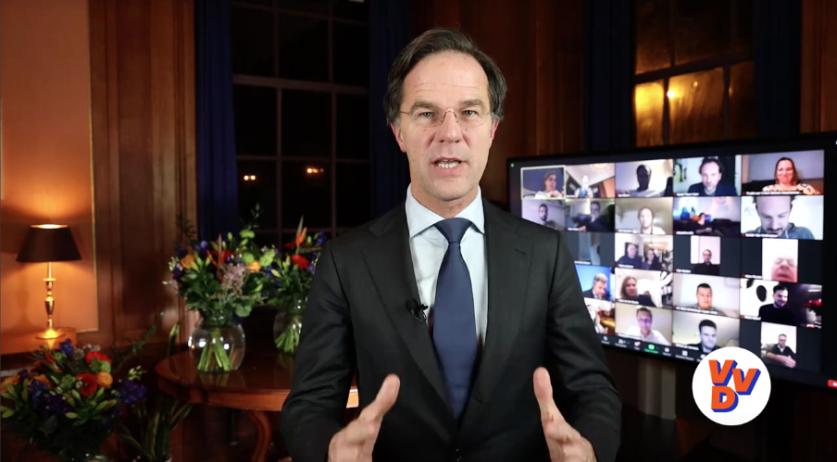 Dutch Prime Minister Mark Rutte said, "I am very proud," when speaking online with supporters of his VVD party on Wednesday after the party was projected to be the largest vote winner in the 2021 parliamentary elections. If exit poll results are accurate, it will be the fourth straight victory for Rutte, paving the way for him to form his fourth Cabinet with the support of 36 of 150 seats in the Tweede Kamer.

"Countrymen, I am very proud," Rutte said after learning his party could gain three seats in the lower house of Parliament. "The agenda ahead of us is enormous. We will have to continue leading the Netherlands through the coronavirus crisis in the coming weeks and months," he said.

"And of course I would like to congratulate Sigrid Kaag with the enormous victory of D66," he said, praising the party which was expected to take the second largest chunk of seats in the lower house. It is "quite obvious" that the VVD and D66 will begin to talk about the formation of a government, which Rutte has said needs to be formed quickly because of the pandemic and economic crisis.

Rutte wanted to hold off on specifics until all party leaders have a chance to speak with the Chair of the Tweede Kamer, Khadija Arib. They will meet Thursday afternoon, Rutte confirmed. He did say, "I also very much want to cooperate with the CDA." A coalition between the VVD, D66 and CDA was projected to carry a majority of Tweede Kamer seats.

"Congratulations to everyone again. And now it's time to work hard", Rutte said in his victory speech. "This was a lovely evening, but we have a lot to do."

In her speech, Sigrid Kaag, the leader of centrist D66 said, "We managed to show the voters who we are and what we stand for. And what we have to offer." She spoke triumphantly after an apparent gain of eight seats in the Tweede Kamer, which would put her party as the second largest with 27.

"I see the trust that we as D66 have received as confirmation that we are the only progressive party that has held influence in recent years," she said. "We take that trust seriously."

Kaag congratulated Mark Rutte, leader of the VVD, who is likely to remain as prime minister after his fourth straight victory. Speaking on the possibility of remaining in a coalition with Rutte's party, Kaag said she wanted to see Dutch policy become "more progressive, fairer and greener" compared to Rutte's third Cabinet. "We want to work together to achieve that."

Far-right PVV leader Geert Wilders looked likely to wind up in third place, with his party likely losing three of its 20 seats. "I had hoped for more than those seventeen seats," Wilders said after the exit poll results were released.

He congratulated Rutte and Kaag, and said it was likely he would remain in opposition while the VVD, D66 and CDA attempt to form a coalition government.

"Thank you to those 1 million voters who voted for the PVV," Wilders said. They helped to stem the losses his party faced in the 2021 election which were caused in part by the success of far-right FvD.

Current coalition parties CDA, CU: It's up to Rutte and Kaag now

Finance Minister Wopke Hoekstra, who leads current coalition partner CDA, said he was disappointed by the exit poll results. This showed a likely loss of five seats to 14, but enough to put a coalition with the VVD and D66 at the threshold of 76 seats needed for a majority in the Tweede Kamer.

Hoekstra would not speculate on whether or not his party would enter into the first discussions on Cabinet formation, saying it was now "up to the VVD and D66 to take responsibility."

ChristenUnie was also projected to lose one of its five seats, a difficult result for the fourth coalition party in the third Rutte Cabinet. "We look back with gratitude about what we have been able to do. We would have liked to have shown that you will not be punished for taking responsibility," said party leader Gert-Jan Segers.

He did not want to speculate on what parties will make up the next coalition.

The party was hopeful that it would hold its five seats, and would not lose one as research firm Ipsos projected. "Let's see what the result is first. They are just exit polls," said Carola Schouten, the outgoing Minister of Agriculture and number two at the CU party.

"It remains to be seen ultimately what the results will show."