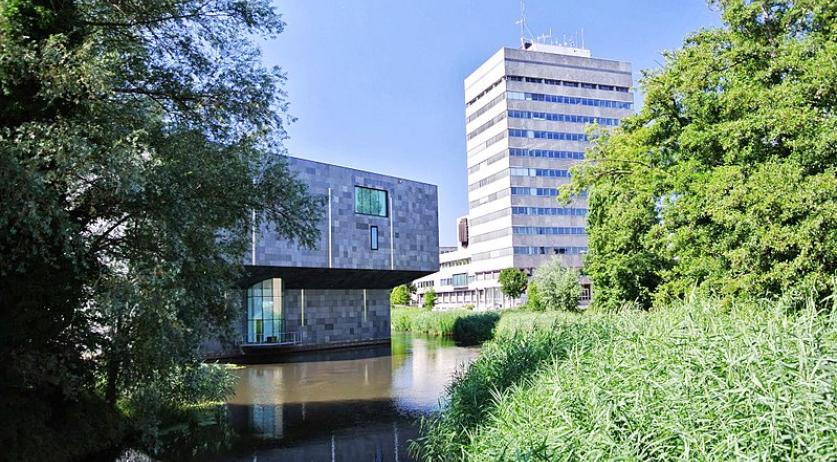 On the left is the Van Abbe Museum at the end of Stratumseind in Eindhoven. It sits across the water from the city hall complex on the right side of the photo Ben Bender Wikimedia Commons CC-BY-SA
Culture
Eindhoven
Stratumse Poort
Stratumseind
BODAC
archaeological find
Sunday, November 15, 2020 - 08:15
Share this:

Archaeologists found remains of the medieval Stratumse Poort on the small square of Stratumseind in Eindhoven. They discovered what they believe is the remains of a gate wall, and the facing and posts of a bridge over the city canal, the city of Eindhoven announced.

The municipality of Eindhoven commissioned the BODAC researchers to dig a archaeological test trench on Stratumseind, because the place is known to have a city gate from the Middle Ages. The gate stood at a bridge over the city canal next to the river Dommel, and secured access to the city.

The researchers found a substantial brick foundation of the gate, located partly along the canal and thus in the water. Multiple repairs were carried out on the wall, likely due to the canal water freezing. The brickwork method and type of bricks used helped the archaeologists date the wall to the 14th or 15th century.

They also found 10 posts and a plank along the canal, which they believe formed part of the facings. Shards of pottery in the filling of the canal dates this part of the canal to around the 15th century. Some very sturdy square oak posts were found in the canal, which were likely used to carry the bridge. Samples were taken of the wood for tree ring research, to help date them.

"The intention is to keep the remains in the ground for now, because there will likely be more possibilities for research in the future than there is now," the city said.