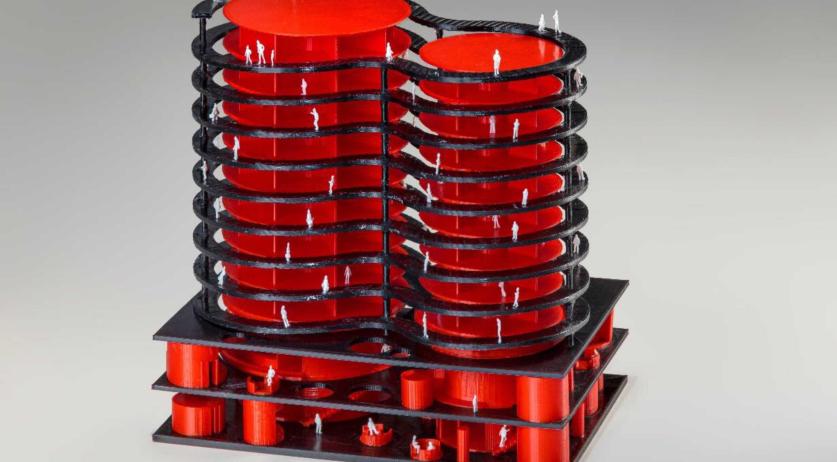 The plans are based on a market analysis the municipality commissioned from bureau SITE. In order to give an alternative location a real chance of success, and increase the livability for residents of the city center, the number of window brothels in the Red Light District should be significantly reduced, though not eliminated altogether, the market survey showed.

One of the main arguments to close businesses in the Red Light District is overcrowding caused by tourism. Many inhabitants in the area have complained about noise and violence for years. Thus, in the new project, one primary concern is to control the flow of visitors.

The design of the hotel should facilitate this. An initial model for the building shows two cylindrical towers with a ramp. Visitors would use the indoor ramp to past the windows and other types of workplaces (e.g., catering and entertainment). This structure provides many more opportunities to keep a grip on visitors and to prevent nuisances and unsafe situations.

Many businesses and sex workers were outraged by Halsema’s letter. One of the women exclaimed, “you can’t throw us out and put us in Noord or Zuid, can you?”

He also adds, “you have the coffee shops, entertainment and catering. It is not the case that it suddenly becomes much quieter when you remove the windows. In short, we as entrepreneurs believe that the neighborhood should remain the neighborhood.”

Femke Halsema told AT5 that she was confident in the process. However, she also acknowledges the many challenges that lie ahead. “You cannot change such a historically developed city center by government decree. That takes time, it has to happen organically, people have to start believing in it.”

Shortlist of possible location for Amsterdam's prostitution hotel or center: