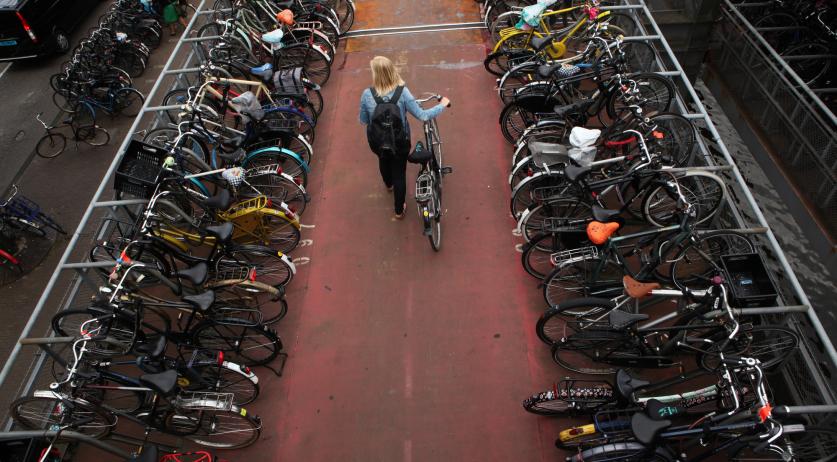 NL residents cycle most in the world; E-bikes gaining popularity

Netherlands residents make the most use of bicycles for transport in the world. 28 percent of all trips in the Netherlands are done by bike, considerably more that second place - Denmark at less than 20 percent, according to a study by the Dutch knowledge institute for mobility policy KiM.

The KiM also noted that e-bikes are quickly gaining popularity in the Netherlands. Last year, 18 percent of bicycle trips were by electric bike, compared to only 8 percent in 2013. Of the total distance traveled by bike last year, 26 percent was by electric bike. E-bikes are increasingly used for the daily commute, with 23 percent of e-bike use being to travel between home and work.

Over the past decade, the share bicycles have in traffic in the Netherlands remained relatively stable at 28 percent, though there was a slight increase in bicycle use in the four large cities - Amsterdam, Rotterdam, The Hague and Utrecht, KiM said.

Zwolle and Groningen stood out in terms of bicycle use. In those two cities, more than half of all traffic movements were by bike last year. This was much less in Amsterdam, Rotterdam and The Hague. According to KiM, this has to do with the extensive public transport networks in those cities.

The KiM also noted that the coronavirus crisis had only a limited effect on the use of bicycles in the Netherlands. The average distance covered by bike increased from 3.4 kilometers in September 2019 to 4.1 kilometers in July of this year. The number of trips also increased slightly.

37 percent of people who now avoid taking public transport due to the Covid-19 crisis, take the bicycle instead. About half of them plan to continue using the bike more after the coronavirus measures are lifted.