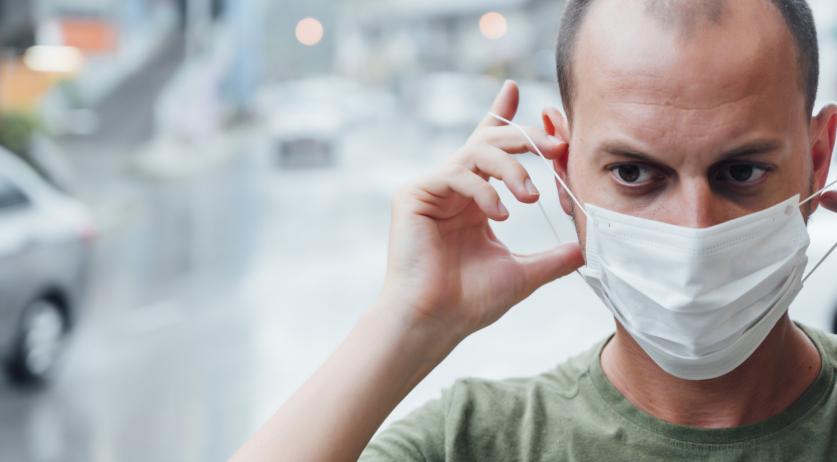 The government's "advice" to wear face masks in stores in Amsterdam, Rotterdam and The Hague is too vague, according to shopkeepers in the Netherlands. Do they have to refuse entry to customers not wearing a mask? Or is it up to the customer to decide whether they want to wear a mask or not? Clarity is needed, NRC reports after speaking to some stores.

De Bijenkorf in Rotterdam handed out masks to customers on Tuesday - one of the few stores that decided to enforce the mask advice. Hema and supermarkets Albert Heijn and Jumbo said they'd ask their customers to follow the advice, but won't enforce it. Supermarkets' association CBL gave its members similar advice, to prevent fights at the door.

In a press conference on Monday, the government advised the public to wear masks while shopping in the three large cities with high numbers of coronavirus infections. Amsterdam, Rotterdam, The Hague and Eindhoven went further, urgently advising people in the cities to wear masks in indoor public spaces. Amsterdam mayor Femke Halsema said she would have liked to make masks mandatory, but that is too legally complicated on a regional  level. The national government will have to take that step, she said.

On Tuesday, Health Minister Hugo de Jonge stressed that the masks measure is still just advice, not mandatory. Thereby not clearing up any confusion for shopkeepers as to what they have to do.

"One shopkeeper will enforce it strictly, the other will not. Customers then no longer understand," Jan Meerman of trade association INRetail said to AD. According to him, an obligation, making masks mandatory, would work a lot better. "Then you have clarity."

Political parties in parliament also find the rules unclear, and more and more votes are turning towards implementing mandatory face masks on a large scale, according to NOS.

D66 leader Rob Jetten said he understands that shopkeepers don' want to "play police", but a second lockdown needs to be prevented. "The government therefore needs to seriously consider face masks in crowded  inside spaces." And that must be implemented nationally, to prevent confusion, he said to the broadcaster.

SP leader Lilian Marijnissen said that "nobody understands" exactly what the current measures are. Jesse Klaver of GroenLinks said that the government's measures are far too unclear and non-committal. "You have to have the same rules everywhere: in public spaces where you can't keep sufficient distance, wear a face mask. You just have to do that," he said to NOS.

PvdA leader Lodewijk Asscher criticized how the government is handling the whole mask situation. "They said for months that it does not work, while it is mandatory in public transport and now you get the intermediate form of shopkeepers asked to do it." He'd also like mandatory masks in all public areas where social distancing cannot be maintained.

The new measures implemented this week, which took effect on Wednesday, will be evaluated on how effective they were in the coming weeks. If the number of coronavirus infections did not decrease sufficiently by October 20, the government is ready with additional measures, AD reports. These could include a curfew, and mandatory masks, among other things.