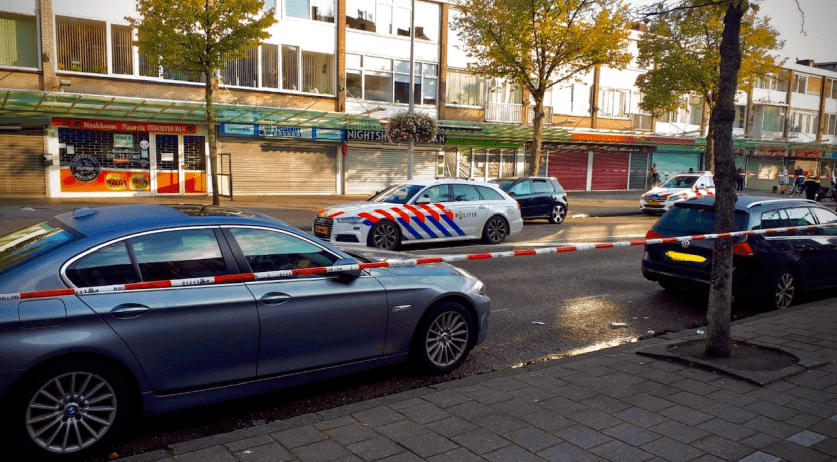 The scene on the Osdorperban In Amsterdam where a man was found shot alongside an unspecified explosive. Sept. 26, 2020 Politie Politie
Crime
Amsterdam
Noord-Holland
shooting incident
explosive
EOD
Defense
politie
Sunday, September 27, 2020 - 13:05
Share this:

The Amsterdam mayor’s office ordered two businesses closed in the interest of public safety after a man was found shot in front of them early Saturday morning. An explosive device was also found at the scene near the victim, police said.

The incident “seriously affected public order and the feeling of safety in the vicinity of both buildings,” a statement from the mayor said, according to broadcaster AT5. The businesses involved were a convenience store and a liquor store.

Police responded at about 4:15 a.m. to a report of shots fired on the Osdorperban. There they found the injured man, who was taken to an area hospital.

The Defense Ministry’s explosives disposal unit was also dispatched to the scene, which may have consisted of a black package with ropes or wires leading to it. The street was closed off so police could secure trace evidence, including shell casings found on the street.

On Monday, the owner of a phone shop on the same street found bullet holes in the store front glass and shell casings near there, police said. Two days later, a parked car was shot at not far from the area on Lodewijk van Deysselstraat.

At the beginning of the month, an explosive damaged the front facade of a night shop, police said.