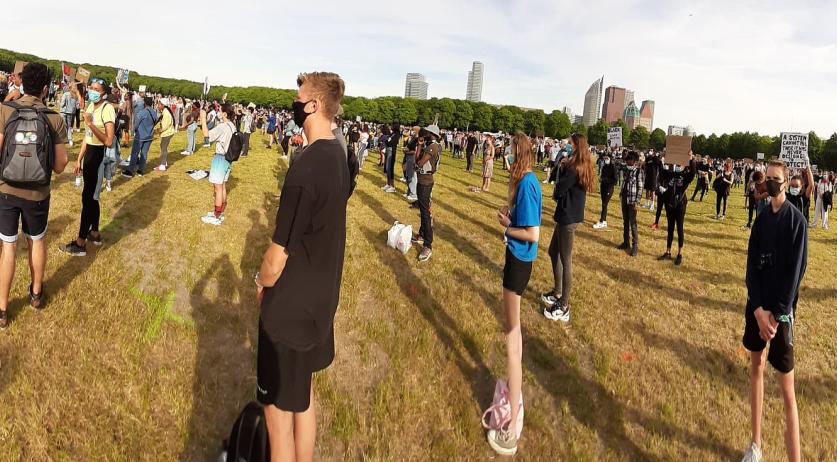 Demonstrators rallied in support of the Black Lives Matter movement on Tuesday, gathering on the Malieveld in The Hague and on the Grote Markt in Groningen to protest a culture of systemic racism in the Netherlands. As of 7 p.m., both events remained peaceful demonstrations, with well over a thousand in The Hague and hundreds more in Groningen, all of whom were reportedly sticking to social distancing rules.

The protests follow the death of George Floyd in the United States on May 25, which incited multiple Black Lives Matter protests throughout that country, and several in Europe, in recent days. On Monday, the same movement drew some 5,000 demonstrators to the Dam Square in central Amsterdam, raising concerns about the potential to spread the SARS-CoV-2 virus and cause another Covid-19 outbreak.

However, according to the Groningen municipality, the protest in that city was of a very different tune, drawing crowds of up to 800 people who remained peaceful and at a distance of 1.5 meters from one another. "We're very satisfied with how it went tonight. You can't compare it at all [to Amsterdam]," a municipal spokesperson told NL Times.

The crowd in the northern city chanted slogans like, "No justice, no peace, no racist police."

"I am demonstrating in solidarity with black Americans who are structurally discriminated against. At the same time, I think it is happening here too, perhaps on a different scale, but it is clearly not just an American problem," a demonstrator told RTV Noord. "It is more violent there. I think it is important that people come together in Europe too, despite coronavirus.”

Another protester said he hoped the Groningen event would gain attention outside of the Netherlands via social media. "Then in the U.S. they will see that people in Europe are standing up for them, which gives extra support and strength," he told RTV Noord.

In The Hague, participants were asked to go down on one knee, and raise one fist in the air. As the mass of demonstrators took a knee, stories were recounted about people of color who died at the hands of police officers.

Black Lives Matter in the Netherlands has asserted that the country has a uniquely racist history, pointing to the presence of Zwarte Piet in Dutch society, which is widely seen as a racist symbol as a result of its association with black face, as well as the 2015 death of Mitch Henriquez, who died while in police custody after officers used a choke hold to apprehend him.

The Hague had warned demonstrators to adhere to social distancing measures, and the crowds were both resolute in their message and understanding of the public health concerns. The gathering reached between 1,000 and 2,000 people according to officials. Spray paint was used to make marks on the grass estimating 1.5 meters of distance to give protestors assistance in complying with distancing rules.

As far as national authorities were concerned, the risk in the demonstrations lay in the lack of social distancing and the potential spread of Covid-19. Following Monday's demonstration on Dam Square, Minister of Health Hugo de Jonge urged attendees who begin showing symptoms of illness to get have themselves tested for Covid-19, an option which is now widely available to the public.

"Just like yesterday on the Dam, today there are demonstrations on the Malieveld. There the drone immediately gives a nice view from above, and it is easy to see how people are maintaining their distance," the police’s drone unit said on social media about the protest in The Hague. 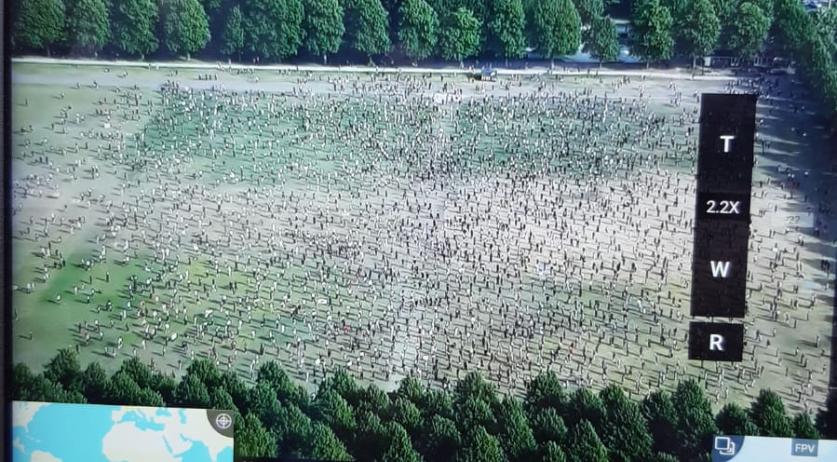 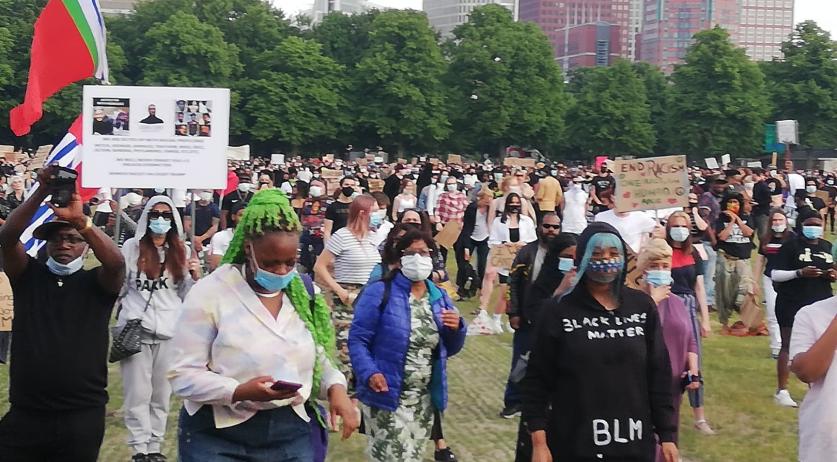 Protestors gather on the Malieveld in The Hague to denounce systemic racism and police violence against people of color. June 2, 2020 Alphonse Muambi via Afro Magazine