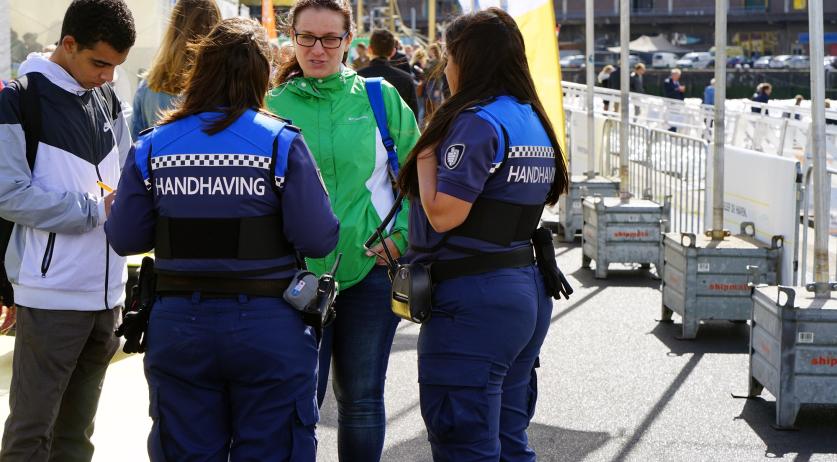 Justice Minister against arming enforcers as they protest against violence

Enforcement officers held actions in eight cities on Tuesday to protest against the violence they encounter during their work. They feel that recent incidents show why enforcement officers need to be armed with 'defensive equipment' like batons and pepper spray. Minister Ferdinand Grapperhaus of Justice and Security is against arming enforcers, but for equipping them with bodycams and emergency buttons.

Protests were held in Amsterdam, The Hague, Ede, Rijswijk, Leeuwarden, Den Bosch, Beverwijk, and Velsen from noon on Tuesday, the trade union for enforcement officers NBB said to NU.nl. In 12 other municipalities, enforcement officers will show their "support" for the actions in a "different way". The protests are in response to two enforcers being attacked on a beach in IJmuiden on Ascension Day last week.

According to the union, the attack in IJmuiden again shows that enforcement officers need defensive equipment like a baton and pepper spray. Some enforcers are already equipped with bodycams, but that differs per municipality. And negotiations to arrange this nationally are taking too long. "We are now experiencing as much violence in the corona period as normal in a whole year," Ruud Kuin of the NBB said to the newspaper. "And that was reasonably predictable: the fines are considerably higher during this corona time and you are by definition dealing with groups. So that increases the risk of aggression."

Justice Minister Grapperhaus is against arming enforcement officers. "The monopoly on violence should remain only with the police," he said after meeting with the mayors on the Security Council on Monday evening, NOS reports. The Minister is in favor of more bodycams for enforcers, he added. He could not say whether each enforcer would be given a bodycam, but did say that these cameras have proven to have a deterrent effect. He's also looking into an emergency button, with which enforcer in trouble can summon police support.

Grapperhaus said he shares the enforcement officers' concerns. "It is outrageous that young people on the beach at IJmuiden attacked enforcers. That is also a matter of no understanding of how society works. If you are addressed by an enforcer, then you have to stick to it," he said, according to the broadcaster. According to him, bodycams and an emergency button should be sufficient to prevent this type of violence.