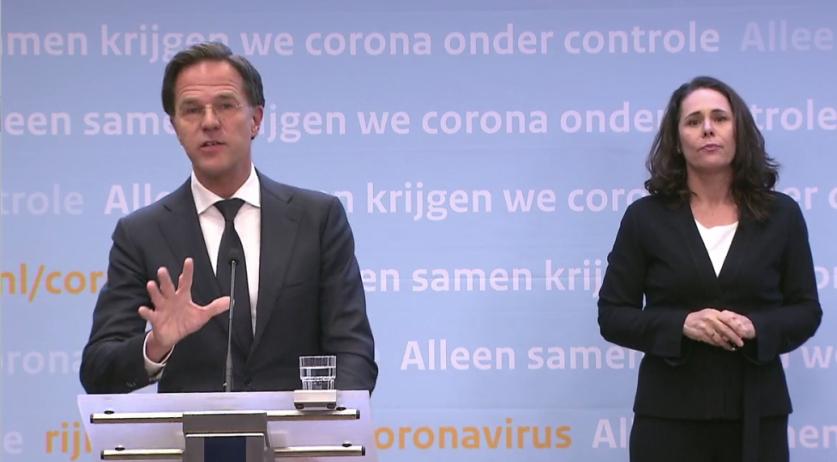 Netherlands will open primary schools in May; Other lockdown measures continue

Prime Minister Mark Rutte confirmed on Tuesday that primary schools will reopen after the May vacation period, weeks after they were ordered closed to help contain the spread of coronavirus. The schools were part of several points Rutte wanted to make on behalf of his Cabinet just one week before the first coronavirus social distancing measures were set to expire.

He also discussed the extension of a ban on most organized sports and close-contact businesses through May 20, the reopening of secondary education in June, and the cancellation of all large events through September 1, including professional football, which effectively ends the Eredivisie's 2019-2020 season. No advice was given about summer holidays, with Rutte saying people should remember that restrictions will likely be loosened or tightened once every three to four weeks.

"This coronavirus crisis is one of the most substantial, most gripping, and most troubling periods that any of us will ever experience. I've been struggling with you for the past few days," Rutte lamented. "We don't want the virus to resurface."

Joined by the head of public health agency RIVM, Jaap van Dissel, Rutte repeated what the country's health leaders have been saying for a week: That the number of Covid-19 patients in intensive care and the reduction of new patients with coronavirus in hospitals are both positive signs. However, "the pressure on healthcare is still enormous," he said.

Both men expressed concern for healthcare workers, and said that they have to get a break and a chance to recover before any more rules may be relaxed. "For months, these people are already working shifts of twelve hours a day; They need time to recover."

"All measures can only be reversed gradually, but then every step must be clear," Rutte said. "I understand the impatience, but a rapid relaxation ensures that the virus can peak again, in a second wave, as it were."

The Cabinet will again revisit the existing measures one week before they are set to expire. But the prime minister warned that "the virus takes every opportunity to spread."

He continued, "One person's freedom should not be at the expense of another's health."

Schools, Daycare set to open on May 11; High schools on June 1 or June 2

As reported earlier, primary students will in most cases attend school half-time, with most classroom sizes needing to be cut by 50 percent to accommodate health guidelines. The schools will have to figure out the best way forward on a case-by-case basis, and school organizations will be responsible for communicating plans with parents. Students will be allowed to attend afterschool care on the days in which they attend classes.

The use of public transit should be limited as much as possible by parents taking their children to school by bicycle or on foot. Once at school, a 1.5 meter physical distance should be kept not only between adults, but also between teachers and students as much as possible.

Still, Rutte conceded that the "1.5 meter society is not realistic" for schoolchildren, he said. "All data shows that young children are less likely to become infected and that the risk for this group is small," Rutte continued.

However, he said, all students or school workers with health complaints should continue to stay home. The prevailing advice in the Netherlands is that if one person in a household has a fever, everyone in that home must remain there. However, if one person has other cold or flu symptoms, only that person needs to stay at home.

Rutte also suggested that testing for coronavirus would be expanded to include teachers and school staff, with the schools reopening their doors. The Dutch leader said that the he felt the decision will make life easier for parents.

"Few children have been reported with infections, the disease display was mild and the transmission of children to parents appeared to be limited," Van Dissel said. Of the 34 thousand people in the Netherlands who have tested positive for the virus, 124 are under the age of 14, of which 47 were treated in a hospital.

He also said that there were no clusters of children who tested positive for the virus. "Children are underrepresented in the number of illnesses. We see that elsewhere in the world."

"It remains important that sick children do not go to school, but we are confident that this is a responsible measure," Van Dissel said in defense of the decision.

In opening primary schools back up, Van Dissel said that the Netherlands is in close contact with colleagues in Scandinavian countries which have already begun to open up classrooms to smaller groups of students. He said the countries are sharing the results of their work to reopen schools with the Netherlands, and the Dutch will also reciprocate.

The government has set aside the period of April 25 through May 3 for May holidays in the 2019-2020 school calendar for all regions of the Netherlands. However schools were allowed to extend this by a week because of the Liberation Day festivities originally planned for May 5.

Older students will still likely get a chance to rejoin their classmates as well, but several weeks after primary students. "Secondary education will be open from June 1 until the summer holidays," Rutte said. A statement from the government corrected this to say high school students would be allowed to at least partially return to classrooms from Tuesday, June 2.

Children up to age 12 are also allowed to begin playing team sports again starting on April 28. Those from 12 to 18 years of age may play sports or exercise, but only at a distance of 1.5 meters from each other. Still, the prime minister urged people to "use their common sense", and not crowd up alongside sports fields, and to shower at home.

"Individual sports, such as running and cycling, can and should still be done for everyone," he said.

The initial plan from the government to cancel all large events was supposed to be in effect up through the end of May, however that was extended to September 1 on Tuesday. The decision largely matches advice from many mayors in the country, and provides more clarity for some of the biggest Dutch festivals which had complained they were in the dark and did not know how to proceed with their ticket-holders, performers, sponsors, and insurance firms.

It also means a likely end to top-level football in the country for the season which was cut short by the pandemic.

"We will certainly not be able to handle the risks in the coming months, and we want to provide organizers with clarity. That means no Pinkpop, Zwarte Cross and no paid professional football either. That is irritating, but we will have to make that sacrifice."

"Elite athletes are allowed to train at designated training locations if they keep a distance of 1.5 meters from each other and take all hygiene measures as determined by the RIVM," the government said.

While hairdressers and beauticians had put effort into creating a protocol to return to their work, that effort was in vain for the time being. Barbers, masseuses, sex workers and other close-contact professions will still have to stay closed, Rutte affirmed.

"We are not yet safe. There is no vaccine. People who get the virus may have to call on the hospital. The pressure [on hospitals] is still enormous and must really decrease first," Rutte said.

Other businesses, where workers and visitors can keep 1.5 meters away from each other, can continue to stay open, though catering companies like bars and restaurants must also keep their doors closed. "It helps that catering companies, be it a terrace or a cinema, are thinking about how they can adhere to the one and a half [meter] rules. But just because they themselves have a protocol does not mean that the entire sector can open up again."

There was also talk earlier Tuesday of a possibility to allow people to again visit loved ones resident in care facilities. However, the Cabinet decided against permitting this.

"As difficult as it is to not allow visits to nursing homes, we must protect our elderly. We do this, knowing that it is very difficult," Rutte said.

The Cabinet did revise its advice for visiting people over 70 years of age living independently. Beginning on April 29, they can have visits with one or two people only, but the recommendation is that it be from the same people. Those in contact with others should exercise care before visiting an elderly person.

"Do not take the risk, not even with regard to visits with children and grandchildren. It is very difficult, that I know, but we have to protect the elderly," he said.

"The basic rules will remain in force after April 28. Work as much as possible from home," he said. Workout alone, shop for groceries alone, keep your distance from other people, and stay at home with even the slightest health complaints.

"Wash your hands as often as you can. Cough and sneeze in your elbow. These basic rules have brought us to the point where we can now relax other measures. But any relaxation, however small, requires even more patience and discipline from everyone. Stay strong! Do this for yourself and everyone else."

It leaked out earlier on Tuesday that the Outbreak Management Team, a team of experts that is the government's main advisor on how to deal with the coronavirus crisis, advised the government to let childcare institutions reopen without restrictions after the May holiday, and to let primary schools partially open. If this doesn't lead to a major outbreak, measures can also be relaxed for high schools, the OMT said.

The OMT also advised against relaxing visiting arrangements for nursing homes, and against allowing team sports to restart. But it should be safe for children, teens, and top athletes in individual sports to start training again, under certain conditions.

The team of experts could not reach a consensus on whether high-contact businesses should be allowed to reopen. The hesitancy here had to do with lack of knowledge on exactly how contagious the coronavirus is before a patient starts showing symptoms, and the shortage of protective gear. For example, this week hairdressers submitted a protocol containing measures they will take in order to safely reopen. These largely involved wearing masks and gloves. This will increase the already high demand for protective gear.

The OMT's advice is not binding and is mainly based on medical grounds. In deciding which advice to follow, the government also has to take other factors - like stalling education and the social impact of isolation - into account.