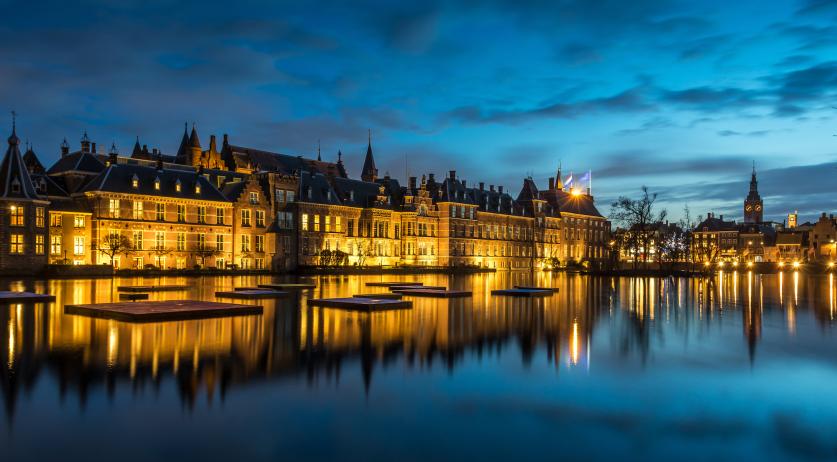 Members of the Tweede Kamer debated the social distancing strategy presented by Prime Minister Mark Rutte to prevent the spread of the coronavirus, and widely expressed their approval to press forward. Hearings on the strategy began in the morning and continued in the afternoon and into the night, until Health Minister Bruno Bruins collapsed in the middle of debate.

It was Bruins' turn to answer questions and criticisms from the leaders of the political parties. He was behind the podium for roughly 35 minutes when he passed out in the middle of questions posed by Geert Wilders, the leader of the far right PVV, about the number of surgical masks available in the Netherlands. Wilders then appeared to hiss at nationalist party leader Thierry Baudet, who was using his phone at the time, to get his attention. Others expressed concern and rose to their feet.

Then Bruins could be seen taking a step backwards before his knees buckled. Social Affairs Minister Wouter Koolmees leapt out of his seat and caught Bruins, then guided him safely to the floor. After about 15 seconds, Koolmees helped Bruins back up on his feet. Bruins then steadied himself, took a drink of water, steadied himself, and walked out of the Tweede Kamer with other ministers.

"I felt faint from exhaustion and intensive weeks. Now things are better again. I'm going home now to rest tonight so I can get back to work tomorrow to fight the corona crisis as best I can," Bruins said on Twitter after thanking everyone for their support.

After hours of debate in the lower house of Dutch parliament, only the two far right nationalist parties of the Netherlands said they supported a full lockdown of the country, where the citizenry would be forced into quarantine with no end in sight. The two parties in opposition were the PVV, which holds 20 seats in parliament, and FvD, which holds two. There are 150 seats in total in the Tweede Kamer.

"People will die, that's not good news," Wilders said in debate. "The house is on fire, but you don't use all the water that is available." He said he wanted to "make sure people's movements are reasonably limited" to prevent the further spread of the viral infection.

Rutte said that is exactly what has happened already, without the need for a Draconian measure where people could remain in their homes for years. "People are working at home en masse. The traffic jams are gone," Rutte said.

Baudet said the government's strategy of trying to accomplish group immunity "is highly questionable." He also said, "It would have been a lot better if we had acted sooner," and called for a full lockdown similar to what has taken place in Singapore."

"In Singapore we see more infections again. After a lockdown, the virus resurfaces there," shot back Rob Jetten, the leader of D66. It echoed a sentiment earlier in the day by Jaap van Dissel, the director of public health agency RIVM. Van Dissel pointed out that a long lockdown only protects the public if a vaccine is created during the lockdown period.

Rutte criticized Wilders and Baudet, saying their vision was one where people remain in their homes for one to two years, with no reason to believe a lockdown strategy would be effective in containing the virus.

"There will be a point where you have to stop and restart an open society," Van Dissel said, according to NU.nl's liveblog on the debate. If the virus reappears, the population will be just as vulnerable to it as the first time.

The leader of political partie ChristenUnie, Gert-Jan Segers, agreed, saying that nobody, including Baudet, has the knowledge or experience with a situation like the coronavirus pandemic to speak with such certitude.

Prime Minister Rutte added that the Netherlands is incomparable to Singapore, an island nation with a population less than a third the size of the Netherlands.

GroenLinks leader Jesse Klaver, whose party is also in opposition to the ruling Dutch coalition, said his left-wing party supports the government's plan. "Everything is aimed at minimizing the consequences. We support the Cabinet's approach."

For his part, Labour party leader Lodewijk Asscher also pressed the Prime Minister on the issue of herd immunity after Van Dissel explained to the parliamentarians that achieving "herd immunity" against Covid-19 is not the end goal. He said it is merely a tactic to buy time while a vaccine is being worked on, and stressed the importance of maintaining social distance. He previously said that the herd immunity is only achievable when 50 to 60 percent of the Dutch population need to have had the virus.

Later, Rutte stressed that although he praised the concept in his address to the nation this week, the message was a bit misunderstood. Flattening the curve and spreading out the infection rate so as to not overwhelm the healthcare system is the real priority.

None of the Netherlands coronavirus fatalities were treated in ICU

Earlier in the day, Van Dissel answered questions from multiple parliamentarians, saying that a complete lockdown of the country is not the best option, because it does not build up the population's immunity against the virus. "Lockdown has apparent benefits in the beginning, but major drawbacks in the long run," he said.

Diederik Gommers, chairman of the Dutch Association of Intensive Care Units, spoke to the parliamentarians about the Covid-19 patients currently being treated in ICU - 139 as of Wednesday. According to him, the group is split right in the middle - 50 percent younger people and 50 percent elderly people. None of the people who died were in ICU, he said. They were so sick that, in consultation with the family, it was decided that further treatment made no sense, he explained.

According to Gommers, around half of the Covid-19 patients currently in ICU are in Noord-Brabant and Limburg. The rest is spread across the country. He called the current situation in the ICUs under control. The Dutch ICUs have around 1,150 beds and they are working on scaling that up to 2 thousand.

He did raise concerns about the availability of protective masks, asking the parliamentarians to make sure healthcare workers are not left without protective gear. This means not only purchasing medical masks from abroad, but also consulting with other sectors in the Netherlands that use them, he said. On Wednesday, KLM's partners in China donated 80 thousand medical masks to the Netherlands.

Gommers said that the effect of the strict measures the government announced on Thursday and Sunday will only be visible in around two weeks. "My idea is that the cabinet has done well," he said.