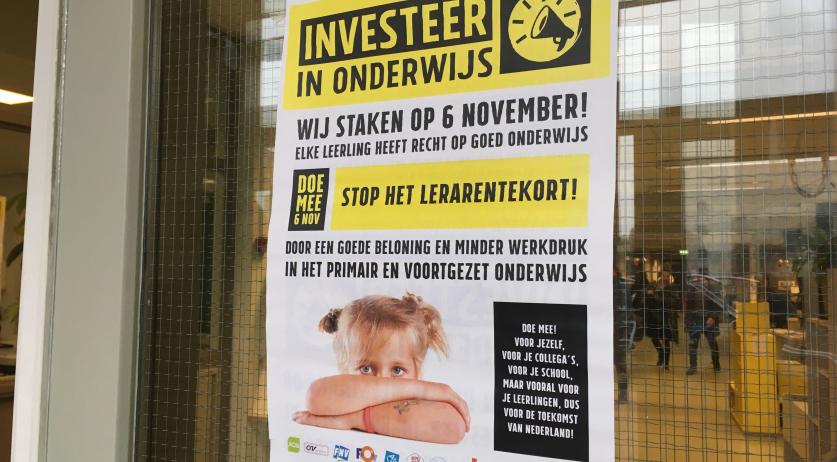 A third of childcare organizations cannot offer extra out-of-school care to parents during the upcoming teachers' strike, because they simply do not have enough staff to manage it, according to a poll by Brancheorganisatie Kinderopvang, NOS reports.

The next teachers' strike, the fourth in a short period, is scheduled for January 30th and 31st. At AOb, the largest teachers' union, some 3 thousand schools already indicated that they will participate. Teachers are striking for extra investments in education and a lighter workload.

With the strike approaching, parents are contacting out-of-school childcare organizations to arrange somewhere for their children to be on Thursday and Friday next week. And while the majority of daycares could arrange extra activities for those days, a third had to tell parents 'no'. "That is not because they don't want to, but especially to avoid burdening staff even more," the sector organization said to NOS.

The childcare sector has been struggling with staff shortages for years. Over 100 thousand people work in the sector, and there are currently over 3 thousand vacancies, according to NOS. The shortage continues to rise, especially now that a new law imposed stricter requirements on staff.

The organizations that are offering extra care during the strike, mainly do so because they want to help the parents. "Parents should be able to rely on us" and "We don't want to leave parents with no options" were frequently given reasons in the poll.

Teachers are losing support from the childcare sector, according to Brancheorganisatie Kinderopvang. "This is the umpteenth strike," one respondent said. Another called it "no longer fair" to put this extra pressure on childcare workers for the "umpteenth strike in education".

Boink, the organization for parents in childcare, is noticing the same sentiment among parents. "There is certainly sympathy for education and the problems there, but it seems as if the strikes miss their target," a spokesperson said to NOS. "Parents are gradually getting fed up with all the strikes."

Parents who can't arrange alternative care for their kids during the strikes, sometimes have to miss work. And those who can arrange daycare incur extra costs, according to Boink. "Out-of-school care is often more expensive. Now you have to put your child there for two whole days. That's serious money."