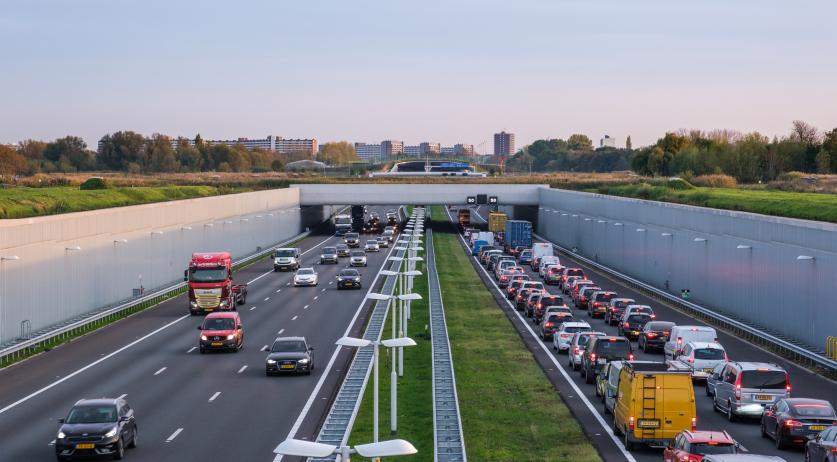 The Netherlands business community suffered 1.4 billion euros in damages last year caused by trucks being stuck in traffic jams, according to a study by Panteia on behalf of business association Evofenedex and Dutch transport and logistics organization TLN, RTL Nieuws reports.

At 1.4 billion euros, the traffic damage in 2018 was 5.6 percent higher than the year before. The largest portion of these damages, 26.1 million euros, came from the daily traffic jams on the A4 between the Burgerveen junction and the Prins Clausplein junction.

"These numbers make the alarm bells ring with me and I assume the cabinet too", TLN chairman Eilsabeth Post said. "Because while we are now absorbing the damage from last year, the traffic jams are steadily growing. And part of the improvement to our road network has stopped due to the nitrogen crisis."

TLN calls on the government to widen the roads and come up with a smarter road design, in which more people use public transport and smart apps advise motorists when public transport is faster than the car.

Bert van Wee, professor of Transport Policy at TU Delt, thinks TLN's alarm lacks "some perspective", he said to RTL. At 1.4 billion euros in damage, the traffic costs are roughly at the level as before the crisis. "Up to 2008, traffic jam costs increased every year, then they fell. Only in the last four years have they increased again. If we had thought that we would ensure traffic jam costs would not rise for ten years, we would have seen this amount as an achievement", he said.

Karel Martens, assistant professor of transport planning at Radboud University and the Israel Institute of Technology, also called TLN's appeal somewhat exaggerated. "The sector simply passes on the costs, so we as citizens pay for it, and not the transport sector." According to Martens, if the transport sector wants to reduce traffic costs, a special infrastructure is needed with lanes specifically for freight traffic. "It is obvious that these must be fully paid for by the transport sector and then you no longer hear from them."