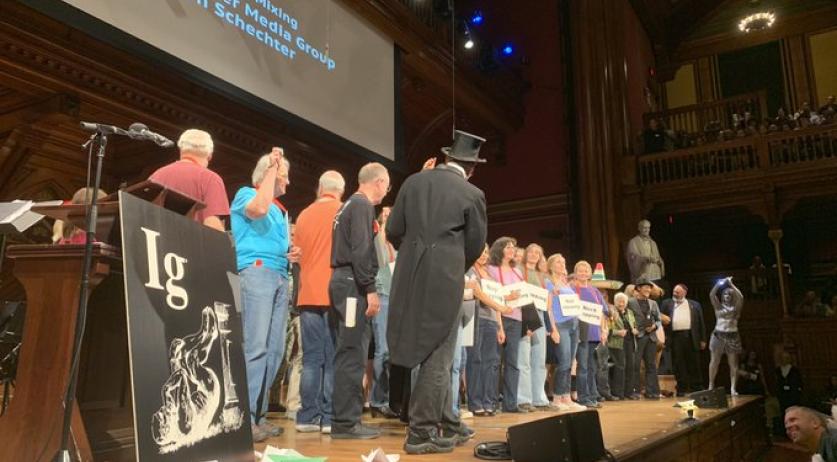 A team from Radboud University Nijmegen was awarded an Ig Nobel Prize for their research into dirty bank notes. The research showed that Romanian banknotes hold onto bacteria the longest, while Croatia's money is cleanest.

The the banknotes study by Andreas Voss, professor of infection prevention at Radboud University, his son Timothy and Turkish colleague Habip Gedik won the Ig Nobel Prize in the Economy category. Andreas and Timothy Voss attended the ceremony at Harvard University in the United States on Thursday, where Nobel Prize winners handed out the awards.

The researchers checked Euro, US Dollar, Canadian Dollar, Croatian Luna, Romanian Leu, Moroccan Dirham, and India Rupee banknotes for the presence of three different bacteria at multiple time intervals. They found that Leu notes from Romania retained all types of tested bacteria the longest, possibly due to a polymer fiber used to prevent counterfeiting but which retains bacteria. Croatian Lunas are cleanest, retaining no bacteria.

The US Dollar proved to be a good breeding ground for hospital bacterium MRSA, while Euro notes retain intestinal bacterium E.coli, and Indian Rupee retained VRE. The Canadian Dollar retained both VRE and MRSA.

Professor Andreas Voss is delighted with the prize, he said to the Volkskrant. "I think that this award fits in with the way I try to promote my subject. Infection prevention is a rather dusty subject for many people. Talking about it with humor makes you more successful."

The Ig Nobel Prizes are awarded to research that seems silly or funny, and then makes you think. Other research projects that were awarded Ig Nobel Prizes this year showed that dog-training clickers also work well with surgeons-in-training, that eating pizza protects against all kinds of diseases, and that the average toddler produces half a liter of saliva every day.

The award ceremony is full of odd little rituals, according to NOS. For example, the audience is encouraged to throw paper planes onto the stage. The winners traditionally receive a cash prize of 10 trillion Zimbabwean dollars. And if their acceptance speech lasts longer than a minute, an 8-year-old girl has the job to shout: "Please stop, I'm bored!"