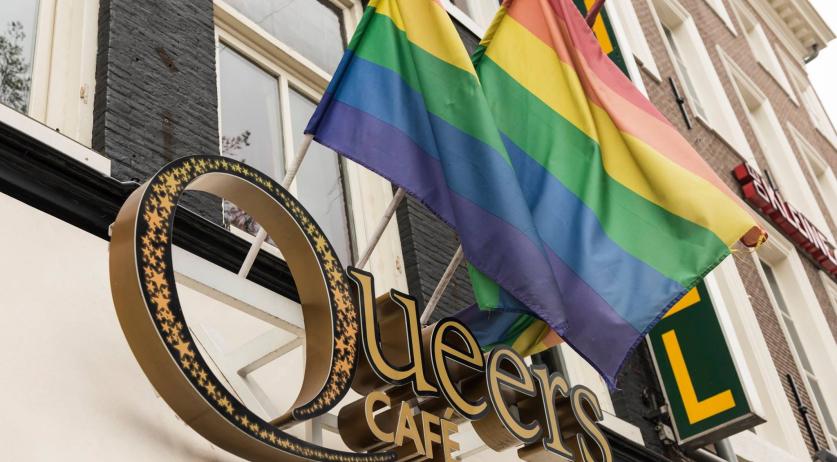 “It hurts me tremendously that we are losing part of our gay history; our community isn’t really up to speed in keeping our gay history alive,” said Dusty, a drag queen in Amsterdam. “We live it, we breathe it, but we never document it.”

She lamented that the young gay men don’t know much about the iconic spots in Amsterdam that made the gay scene what it is today.

“The old queens [need to] tell the young queens about the existence of several places.” Places of yesteryear, such as Vikings and DOK (De Odeon Kelder) and Monopole, now called Queers. It too will soon be added to that ever-growing list of gay bars that used to be.

One of the oldest gay bars in Amsterdam, Queers will be closing its doors on August 12 after almost 50 years in existence.

The bar was opened four years ago by current owner Marcel Brunsveld when the previous business in the space – another gay bar called Rouge – wanted to sell. The 33-year-old has been working in the industry for the past decade and has seen the changes over the years. Brunsveld noted that there were several bars that were not as inclusive as they should be with every member of the LGBTQ group and wanted a place that contrasted that atmosphere.

“I named it Queers because I wanted to include everyone,” said Brunsveld. “I want to have a place where people feel welcome,” he added.

“We have a rule: Don’t judge people.”

As Brunsveld ran around preparing for a special Pride bingo game on Tuesday night, the group of men at the end of the bar spoke, laughed, and hugged like family. Almost every patron willing to speak echoed the same thing: Queers is like a second home.

They affectionately teased Brunsveld and made sure he sat down with them to eat. It was Pizza Tuesday, something the customers hold regularly.

“I’m always coming here around five o’clock, around opening time because I enter here from my work,” Ton van Aerde, 57, said between slices. “I’ve been coming here for almost five years; here you are meeting people and it’s always fun.”

He was a bit late that evening and found a surprise waiting for him on a stool at the bar. Van Aerde pulled out two sheets of paper that read: “Lieve Ton. Welkom thuis.” (Dear Ton. Welcome home.)

Van Aerde said that’s what the men, his friends, were like there. He particularly appreciates how Brunsveld made the bar special including for people over 40 who like to meet people and chat, not just drink and party.

“Marcel is modest and that’s a strong part of him. He makes everybody feel at home.”

Dusty, already in full makeup and high, exaggerated Dolly Parton hair, paced the length of the bar making sure everything was ready. A drag queen for the past 21 years, she has been performing at Queers for the past three.

She first set foot into that bar in 1978, before it was Queers and before it was Rouge –  when it was the recently-opened Monopole Tavern.

“You have to imagine, living in a small town you don’t expect to find much peers,” Dusty said. “So, when you come into Amsterdam and it’s the first bar you enter and it’s completely packed with gay men, that’s overwhelming.”

“All of a sudden you’re not alone anymore.”

Gay bars were safe havens for the LGBTQ people in the 70s when gay-bashing was at an all-time high. She came to Amsterdam from the small town of Nijkerk, Gelderland at the age of 18 after she had been beaten by boys she grew up with because of her sexuality.

“There is still a need for safe havens for our community to meet and have fun,” she said, disappointed that many gay establishments are closing. “We adapt our lives to ‘straight lives’ during our working days so at one point in time you need to be amongst your own community and talk about the things that we like to talk about as a community.”

Dusty and Van Aerde and the other Queers patrons all agree that the bar is unlike other bars in Amsterdam. Its main focus for patrons isn’t drinking and “loud music.” Although early gay bar scenes thrived on the cruising culture, by the late 1990s and the tail end of the AIDS crisis, mass tourism changed the face of the gay scene from cruising towards more general integrated socializing.

A few decades later, Queers filled a new void. “Its grand success is it is a home away from home. Its atmosphere allows you to be cruisy or just have a drink and talk.”

But with the steady decline of gay bars in the city, another air of change is affecting this group. A few of the men at Queers blame Grindr.

His bar is closing for a different reason – the building owner wants to convert the space into a hotel lobby for the Monopole Hotel which sits atop the bar – but Brunsveld still acknowledges that there are far fewer gay bars now. To him, it’s not entirely because of dating apps.

“In the beginning of the first year [of business] everyone was on their phone Grindr, Grindr, Grindr,” he said.  “I know that it’s there, but [things are] changing. A lot of people say it’s bullshit and only for having sex and that’s cool in the beginning but people miss somebody that give them real love.”

Brunsveld believes that people still go to gay bars in Amsterdam, but not as much because gay people are able to go to more straight bars, and there are thriving gay scenes outside of the Netherlands. Both locals and tourists are not solely seeking out gay bars in the city anymore.

Queers will be celebrating the bar’s history with a four-day closing weekend of festivities from August 9 -12, mirroring their four-day opening celebrations years ago.

Brunsveld, who also dresses in drag and goes by the name Peggy Pie, will perform for one last time on August 30 at Queers’ official farewell party and drag queen show, next door at Kleine Komedie.