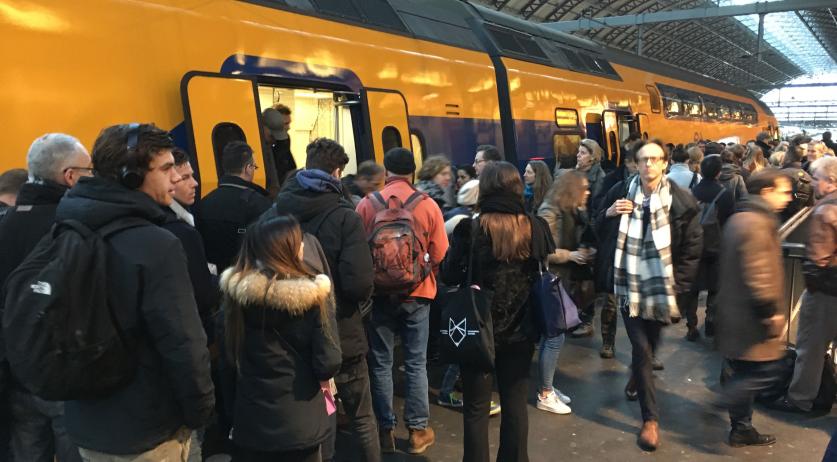 Remarkably, the number of weekend travelers saw a stronger increase than weekday travelers. On Saturdays and Sundays, 4.2 percent more people took the train in 2018 than in 2017. During the weekdays, passenger numbers increased by 2.2 percent. That brings NS' total passenger growth for 2018 to 2.7 percent.

The Netherlands largest train station, Utrecht Central station, handled an average of 194,385 travelers per working day last year. Amsterdam Central Station is in second place with 192,178 travelers per working day. While Amsterdam CS is close to Utrecht in passenger numbers, NS does not expect that the capital's largest station will surpass Utrecht. "Amsterdam has several large stations with Sloterdijk, Zuid and Amstel, Utrecht has only one large station. Moreover, that station is a junction and is located in the middle of the country", a spokesperson said to AD.

The biggest growth percentages went to the relatively new stations. The number of passengers traveling through the Utrecht Leidsche Rijn station, which opened six years ago, grew by 29 percent last year to nearly 3 thousand passengers a day. Utrecht Vaartsche Rijn saw a 24 percent increase in passenger numbers. "It often takes a while for travelers to find new stations and start seeing them as a travel option", the NS spokesperson said. Another factor is that new stations are often located in developing areas. "A large shopping center opened in Leische Rijn. You immediately notice that in the number of travelers."

The top 10 busiest train stations in the Netherlands by travelers per working day: