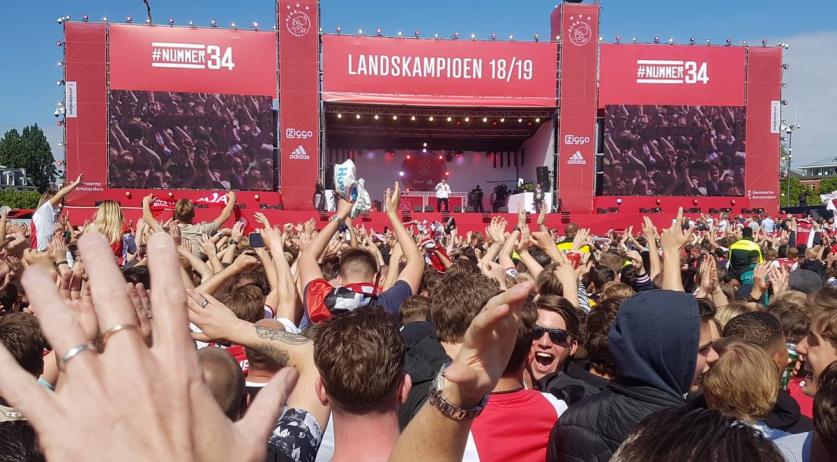 Over 100 thousand people gathered on Museumplein in Amsterdam on Thursday to celebrate Ajax's 34th Eredivisie title and the team making it to the semi-finals of the Champions League. The party happened with no major incidents. A total of 26 people were arrested or various reasons, NU.nl and RTL Nieuws report.

The square was filled with the deafening sound of 100 thousand people singing together: "We are Ajax, we are the best", translated from Dutch. The supporters also sang for Eindhoven's PSV, who lost the title to Ajax this year. "Always look on the bright side of life." The square looked more like a concert venue than the entry to the Dutch capital.

Ajax dedicated their title to their fallen teammate Abdelhak Nouri, who sustained severe brain damage when he went into cardiac arrest during a match in 2017. 'Appie' was cheered for by the crowd as if he personally was responsible for the party. "Nouri, Nouri, Nouri, Nouri", could be heard in between performances. And later: "We love you Nouri we do, we love Nouri, we do, oh Nouri we love you!"

Appie's father and brother attended the party at the team's invitation. They were handed the trophy to show to the crowd. According to his father, this national title is Appie's dream come true. Appie's brother repeated: "We are Ajax, we are the best!" And the crowd went wild.

For mayor Femke Halsema, this was the first Ajax celebration with her as mayor. Before the players were honored one by one, Halsema said a few words. As per tradition, she was booed. Cans of beer were also thrown at her, but Ajax's general manager Edwin van der Sar and captain Matthijs de Ligt caught them easily.

Halsema was prepared for the booing in advance, she said after the ceremony. She did not take it personally, she said. "In Amsterdam you boo the mayor. That is tradition. But I thought it was important to say on behalf of the city how proud we are", the mayor said. "You are the hope for so many young people in Amsterdam. We are proud of you."

During the festivities the Amsterdam police arrested 34 people, authorities said Friday afternoon. At least two were arrested for throwing fireworks at the stage, one for attempted aggravated assault, 16 for insulting authorities, four for disrupting public order, two for possessing narcotics, and one for threats.

Five people were still in custody on Friday, police said.

Behind the trophy! 🏆
Stay tuned for more... 👀#nummer34 pic.twitter.com/0EUI49bPJq