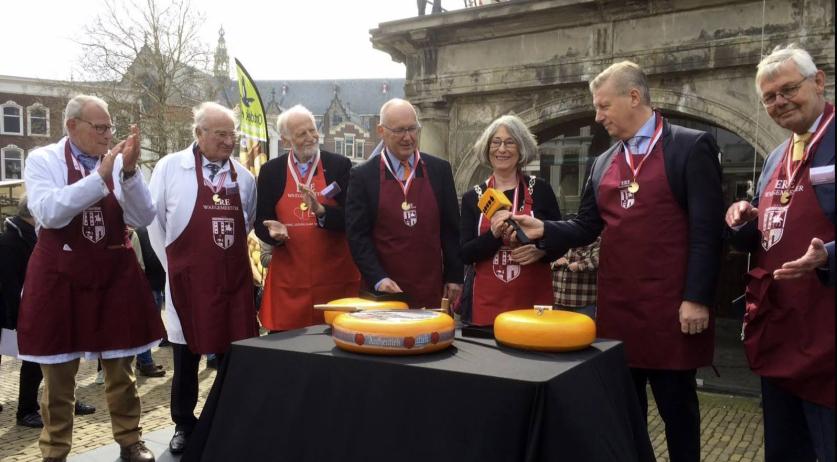 Last week, U.S. Ambassador to the Netherlands, Pete Hoekstra, was named an honorary cheese Weighmaster by Gouda Mayor Mirjam Salet at the annual opening of the city's historic cheese market. "I’ll continue to promote the cheese to our American friends," he reportedly said.

This week, the Trump administration threatened the European Union with a wide-ranging 14-page list of items that could be subjected to new tariffs. Among the items on the list: Edam cheese and Gouda cheese, both heavily produced in or near the Noord-Holland cities that share the same name.

And while the tariffs are meant to compensate for what the U.S. says is $11 billion in annual damages caused by EU subsidies to aircraft manufacturer Airbus, the pain will likely be felt more by American individuals than by Dutch businesses.

That's because Dutch cheese is already positioned as more of an extravagance on the American market. With tariffs ultimately being passed on to the consumer, one industry analyst at Rabobank believes U.S. consumers will be willing to spend extra on items that are already considered to be expensive by comparison to more typical cheese sold in American supermarkets.

"EU cheese exports to the US are currently predominantly focused on specialty cheeses, which are generally sold at a premium price," says Richard Scheper in an email to NL Times. The Dairy Analyst works at RaboResearch Food and Agribusiness in Utrecht.

"These specialty cheeses are usually more resilient to the impact of higher import tariffs," he adds.

The European Commission granted The Netherlands Protected Geographical Indication status for cheeses labeled "Gouda Holland" and "Edam Holland" back in 2010. Cheese which was authentically produced in those regions carry the European PGI logo

"That means these cheeses are certified to have been produced in the Netherlands using traditional methods with milk from Dutch cows and to have undergone a natural aging process," the Dutch Ministry of Agriculture said in a statement released that year.

Of all cheese exported to the U.S. in 2015, roughly eight percent came from The Netherlands, representing about $104 million. That represents about 14 percent of the total amount of cheese exported from the EU to America, according to the Dutch government. That year, old Gouda cheese retailed in the States for 40 euros per kilo, while younger Dutch cheeses sold for 10 to 20 euros per kilo.

It meant that some 6.4 million kilos of Gouda and Edam cheese left The Netherlands for American shores, the government noted. When measured by volume, The Netherlands takes third place among EU nations as the third largest exporter of cheese to the United States. Italy and France top that list, he says, and they also hold top status in terms of value, Scheper writes.

"Countries such as Italy and France, the two largest exporters of cheese to the US within the EU, generally export different cheese varieties than the Netherlands," he says. As such, Scheper's team does not believe the tariffs will unintentionally create a competitive advantage for Dutch cheese exporters.

The exact amounts of the possible tariffs were not revealed by the U.S.Trade Representative. It is thus unclear how heavily Dutch cheeses might be taxed.

Update, 21:30, 9 April 2019: This article was updated to correct an error regarding the top cheese exporters from the EU. U.S. Ambassador to The Netherlands named an Honorary Weighmaster at the Gouda Cheese Market. 5 April 2019 - Source: Photo: Embassy of the United States in The Hague at