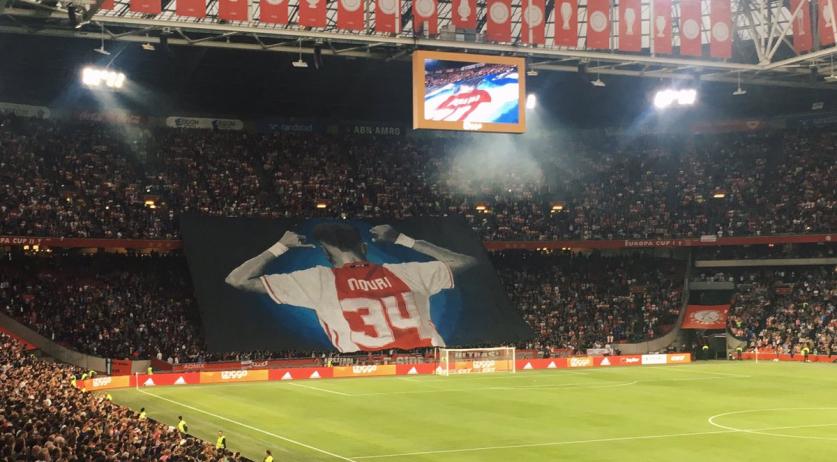 Over 13 months after Ajax player Abdelhak Nouri sustained severe brain damage after a heart attack on the field, his family decided to give an interview to update the public on how he is doing. Father Mohammed and brothers Abderrahim and Mohammed told reporter Joep Schreuder about the love and suffering they've shared while Abdelhak is intensive care, NOS reports.

The 21-year-old football player is doing better neurologically than a few months ago, they said. He is currently in a nursing home. He was moved regularly over the past year, something that cost the family a lot of energy and grief. But his situation is now stable and he is doing better.

The family is very satisfied with his care, father Mohammed said. "Yes, certainly. We have also learned a lot. We can give him certain medicines and food ourselves. We have to be able to do that, in case he comes home." Brother Abderrahim, 25, added: "With all due respect to the caretakers and doctors, they can never give the love that we have for him. If we wash him, we wash him very differently than the nurses do. They also do it with love. Many know him. They feel something for him. And the caretakers that don't know him, say: 'This patient really touches us'. They've also wept with us. And they were there in the moments of unrest."

According to Abderrahim, there is a clear difference in Abdelhak when his family is there, especially when his father and mother come to visit. "That was already the case from day one and the doctors have noticed. In the beginning we were not allowed to stay with him fo a long time. Those are the hospital's rules. You have visiting hours. But after a while the doctors saw that we as family had a lot of influence on Abdelhak. He became calmer. He recognized us. And that he was calm with us and not with the doctors. We reassure him, he hears a familiar voice. Since then we can, and do, stay with him 24 hours a day. Because it does him good."

The family works in shifts, they said. Since mid-July last year, there is always someone with Abdelhak. They help wash him and put him in a wheelchair occasionally, to help prevent physical decline. "That is purely because he does not move. He is bedridden. He can not move his body with his own strength. Only his head", Abderrahim said.

The Nouri family hopes that by the end of the year they can move Abdelhak close to home. They are waiting for a permit from the municipality of Amsterdam to renovate and adapt a home close to his parents' house, where Abdelhak's intensive care can continue.

The bond between the family and Ajax hasn't deteriorated. Many people from the Amsterdam football club still come to visit Abdelhak and the family.

The family also hopes that this interview will give more clarity on how Abdelhak is doing, and that the media and passersby will show restraint when they run into them. "I hope that it is clearer now. If you ask us about it, we think about the whole situation again. When I'm away from Abdelhak, I have a bit of a distraction. It is kind of hard and difficult to keep talking about it. If you are faced with it again, it is very difficult", Abderrahim said.