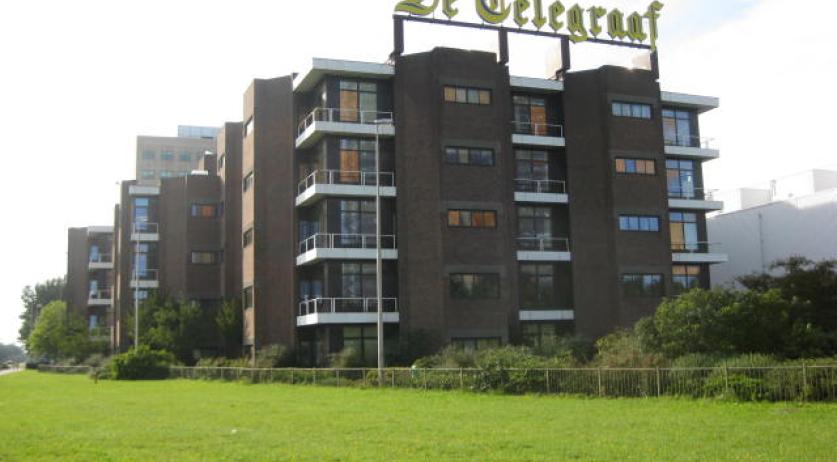 A van crashed through the front door of the building that houses newspaper De Telegraaf on Basisweg in Amsterdam around 4:00 a.m. on Tuesday morning. The vehicle went up in flames, causing a large amount of damage to the building, a spokesperson for the police said to NU.nl. No one was injured.

"The flames came up to 14 meters high out of the van, badly damaging the building. A window in the facade was destroyed by the vehicle, the rest were blown out by the heat of the fire", the police spokesperson said. Firefighters managed to get the fire under control quickly.

De Telegraaf calls the incident an "attack". According to the newspaper, a security guard was in the building at the time, but wasn't injured. "Everything points to an attack. We won't let ourselves be intimidated", chief editor Paul Jansen said in his newspaper.

"There are large heavy concrete flower boxes in front of the facade. Only if you really want to, you can get to the door", deputy chief editor Wim Hoogland said.

The police spokesperson could not yet tell NU.nl whether this was an attack. "For that you need a suspect and a motive", the spokesperson said. The driver of the van is still at large. The police suspect that the crash was intentional.

Last week an Amsterdam building housing, among others, Panorama and Nieuwe Revu was fired at with a rocket launcher. A 41-year-old man from Woerden was arrested. He was arraigned and remanded into custody on Monday. According to NU.nl, this building is a few hundred meters away from De Telegraaf building. It is not yet clear whether these two incidents are connected.