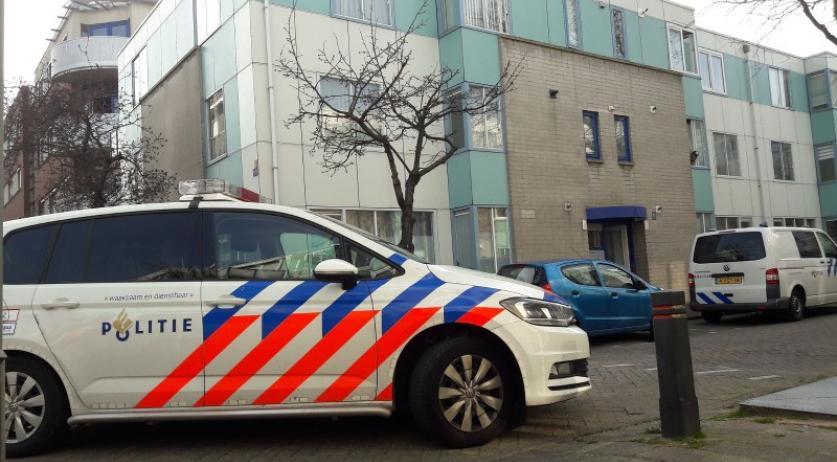 Police at an apartment building on Stationstraat in Schiedam where the body of a newborn baby was found on a second floor balcony, 7 April 2018 - Source: Photo: Politie at
Crime
Rotterdam
Schiedam
baby
body found
newborn
police
forensic investigators
Stationstraat
call for witnesses
Share this:

The body of a newborn baby was found on the balcony of a flat on Stationstraat in Schiedam on Saturday afternoon. The Rotterdam police are urgently looking for the parents of the child. "We are particularly concerned about the mother, who may need medical or psychological care", the lead investigator said in a statement on the police website.

The police responded to the second floor flat around 4:00 p.m. on Saturday, after the residents of the home found the baby on their balcony. How and when the child died is not yet clear. The police did not reveal whether it's a boy or a girl. The residents of the flat were taken to a police station to give witness statements.

An investigation was immediately launched. Forensic investigators closed down the balcony and area around it, and police officers spoke to local residents. Rubbish in a container on Stationstraat was also secured for investigation.

Local residents are shocked by the discovery. "I could see little, mostly men in white suits, with gloves on", a woman who lives in across the street from the flat said to NOS. "It's on the second floor, that's high." She thinks it impossible that the baby was thrown onto the balcony from the street. "More logical is that it happened from the roof opposite. But yes, the people who did this may not think logically."

"This is so terrible", another neighbor said to the broadcaster. "There is almost no other option than that it was thrown from that other roof. People always walk on that roof." According to her, local residents filed complaints with the landlord, asking that the roof be closed with gates and fences so that no accidents could happen. "And now this."

A local resident thinks that a DNA study will help the police find the parents of the child, especially in this diverse neighborhood. "Is it a Turkish, Chinese or Dutch child? If it turns out that the baby was Polish, then it means that the police are now indeed looking on the wrong street", the resident said to NOS.