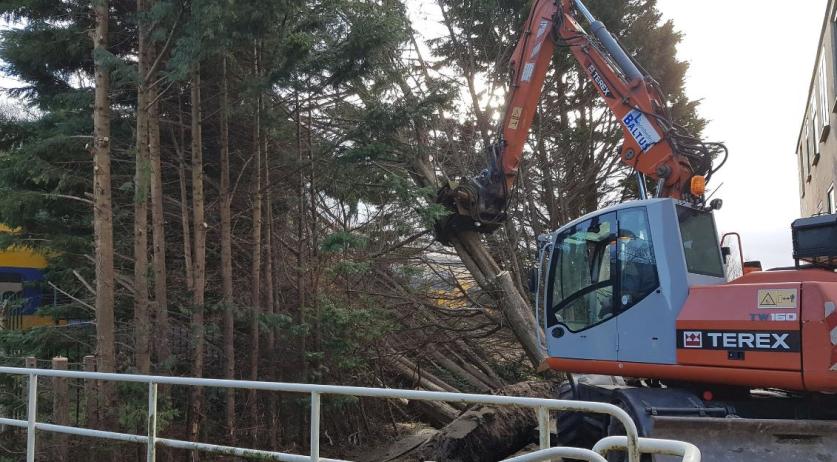 Several days of wet weather, including rain overnight, led to soggy ground that could have caused trees to be knocked over more easily, the VvV said.

At least three people died during the storm. Three men were killed in separate accidents in Zwolle, Enschede, and Vuren. Several people were also injured in a number of accidents across the Netherlands, including 8 children and a bus driver when their school bush crashed into a tree. Minister Kasja Ollongren of Home Affairs took note of the fatalities with great sorrow. "I wish the relatives a lot of strength", she said in a reaction, NOS reports. "Great respect for all emergency workers and everyone who has come to the rescue today.

Part of Schiphol, the University of Amsterdam's Science Park, and multiple train stations had to be evacuated due to storm damage. A glass roof blew off a student housing location near Amsterdam Science Park. It was estimated to be about 10 meters long and several meters wide. Residents went out in vain to search for the roof, but it was not found in the neighborhood. Several homes also lost their roofs in the storm, including in Zandvoort, Rotterdam and Egmond aan Zee.

In Deventer a historic stadium wall of De Adelaarshorst, the home of Go Ahead Eagles, blew over.

In addition to injuries and damage, the storm also caused havoc with all forms of traffic in the Netherlands. Schiphol suspended all flights for around 45 minutes. Hundreds of flights were canceled and those that weren't are arriving and departing with significant delays. NS also stopped all train traffic, and the tram services in Amsterdam and Den Haag came to a complete halt.

Fallen trees and branches caused havoc on the train tracks and possibly damaged a number of overhead lines. ProRail expects that the cleanup will take a while.

There were numerous accidents on the roads across the Netherlands. Blown over trucks in particular caused problems. At least 17 trucks were blown over on Dutch highways by 10:45 a.m. The toppled trucks were on the A2, A5, A13, A16, A20 and the A27. The heavy winds led to several expressway closures, including the A4 between Den Haag and Rotterdam, and the A2, A50, and A58 from Den Bosch towards Eindhoven.