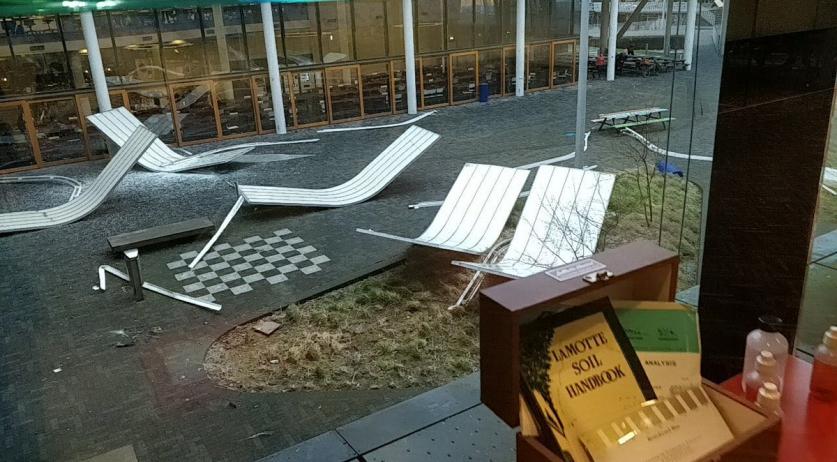 Departure halls 1 and 2 were evacuated and are closed until further notice, according to the broadcaster. Passengers can check in at departure hall 3.

The main building on the University of Amsterdam’s Science Park was evacuated Thursday morning, with witnesses saying heavy debris fell off the building’s roof. The debris looked like large roof panels, one person told NL Times.

The evacuation siren was clearly heard in the background while the worker spoke with NL Times. Emergency services were dispatched to the Science Park just after 10:30 a.m. Students, staff, and other personnel tried to take shelter at a nearby sports center, the ACE Startup Village, and the few cafes in short walking distance. No injuries were immediately reported there.

A glass roof blew off a student housing location near Amsterdam Science Park. It was estimated to be about 10 meters long and several meters wide. Residents went out in vain to search for the roof, but it was not found in the neighborhood.

The station hall of Den Haag Centraal was also evacuated on Thursday morning. The storm damaged the roof of the hall and there is a risk of roof tiles falling onto travelers' heads. On Twitter people report concerns that the roof may collapse. "For your own safety, go to the train platforms NOT THROUGH THE HALL. Follow the staff's instructions", The Hague transporter HTM writes on Twitter.

The Ypenburg police station is closed until further notice, community police officer Ferry van Kollenburg reported on Twitter. The police station's glass facade is suffering under the storm winds, and there is a risk of glass ending up on passers-by's heads.

Glass plates reportedly broke off the Almere Centrum train station building, causing a portion of that building and its surroundings to be evacuated. Some passengers were cordoned off in a corner of the building, where they were given free coffee because of the inconvenience. The Almere police advise people to stay indoors.

Pieces of concrete became dislodged and fell off the Breda train station, BN De Stem reported. That building was also evacuated after 11 a.m.

A home in Zandvoort lost its entire roof to the storm winds: