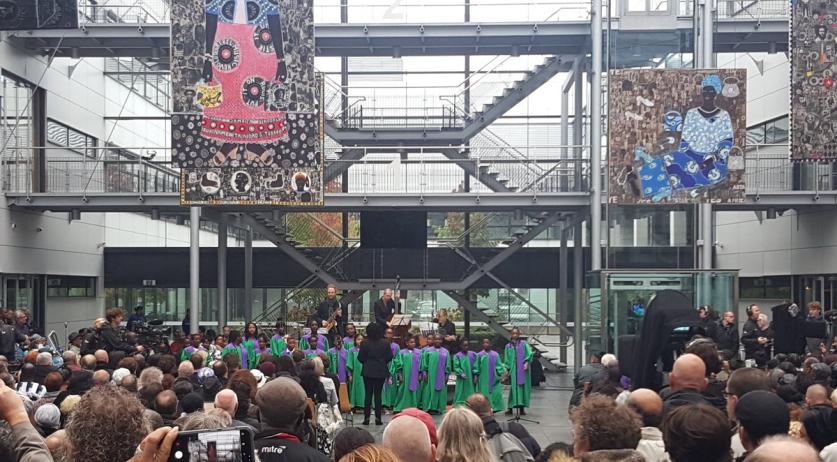 The 25th anniversary of an El Al cargo plane crashing into two apartment buildings in Bijlmermeer, was commemorated in Amsterdam-Zuidoost on Wednesday. The accident killed 39 local residents and the four crew members on the plane.

Several people spoke at the commemoration. Their speeches revealed that each person can still remember exactly where they were and what they were doing when the disaster happened, NOS reports. "We can ask each of you", Muriël Dalgliesh of the Zuidoost management committee said. "And each of you will be able to answer."

Deputy Mayor of Amsterdam Kasja Ollongren was just returning from visiting family in Sweden, she said in her speech. "Do you live in Amsterdam?" a security officer at Schiphol airport asked her. "Do you live in Bijlmer? Because a big accident happened there."

In her speech, State Secretary Sharon Dijksma of Infrastructure and Environment remembered the extraordinary courage of emergency workers in the aftermath of the disaster.

Marlene Truideman, who lost her son and daughter, both teenagers, in the disaster, also spoke. "For 25 years I've thought of you every day. I wish all the survivors a lot of strength. Together we stand strong."

On this 25th anniversary, a monument was revealed for Father Sem - who risked his own life to save a 10-year-old boy from the fire after the disaster. He sustained serious injuries while saving the child. The monument to Sem, who died in the years since, is in the form of a bridge that is placed near other the Growing Monument for the victims of the Bijlmer disaster. The Growing Monument was built around a tree on the site of the Groeneveen and Kruitberg apartment buildings. The 'tree that saw everything' somehow survived both the plane crash and subsequent fire.

After the speeches, the attendees walked to the memorial tree. The names of the victims were read and people laid flowers in front of the plaque listing the names of the dead. A minute of silence and a wreath laying at the tree that saw everything ended the ceremony.

Today 25 y ago, at the start of my career I photographed the aftermath of the Bijlmer airline dissaster. Made a huge impact on me. pic.twitter.com/bSbBi4t4HJ