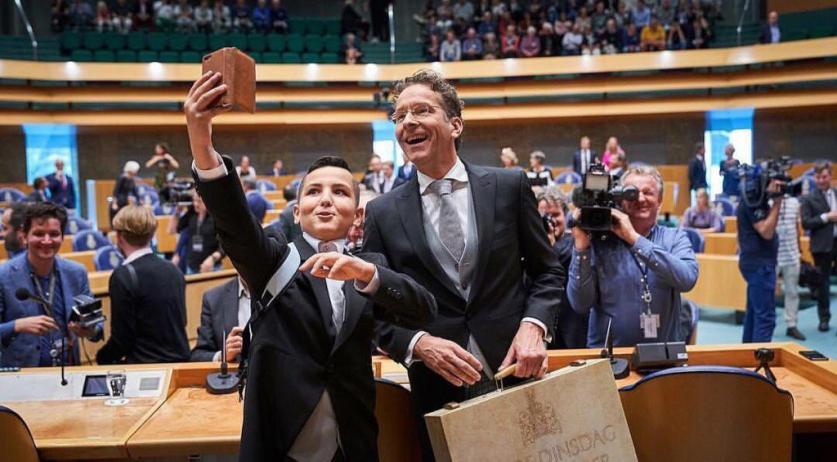 Twelve year old Haci Nuh stole the show in his role as Mini-Minister of Finance when Finance Minister Jeroen Dijsselbloem delivered the suitcase with next year's budget to the Tweede Kamer on Tuesday. Shrouded in a suit and black sneakers, Haci from Rotterdam shadowed Dijsselbloem throughout the entire Budget Day. He was in the Ridderzaal for the King's speech, went on interviews with the Minister and to the Tweede Kamer to discuss te budget, the Telegraaf reports.

Haci was chosen by Rotterdam Mayor Ahmed Aboutaleb to fulfill the role as mini-Minister of Finance on Tuesday. According to Aboutaleb, the boy came up with the best answer to the question: If you were a mini-Minister of Finance for Rotterdam, what would you spend the money on? Haci answered that he wanted to give most money to shelters and refugees. Ensuring peace and calm in the city, and preserving monuments, were also high on his list.

Dijsselbloem had little to tell the Tweede Kamer, the lower house of Dutch parliament, as this government's term is almost at an end. He mostly looked back to the start of the Rutte II cabinet and focused on what it achieved. The Finance Minister also talked about the current economical state of the Netherlands, doing so in simpler terms so that Haci and his peers could understand.