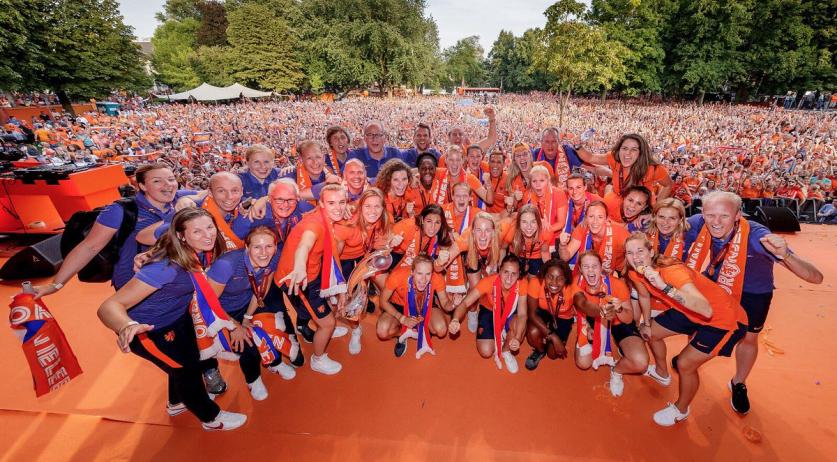 The Dutch national women's football team was celebrated and honored for their European Championship victory in Utrecht on Monday evening. Some 12 thousand fans cheered the Oranje Lionesses as they sailed over the Stadsbuitengracht and then took the stage in Lepelunburg Park for the official ceremony, NU.nl reports.

Captain Mandy van den Berg thanked the Oranje fans for their support. "We enjoyed a fantastic tournament, but especially your support. Thank you", she said. Coach Sarina Wiegman praised the team staff, who were on the stage in blue shirts. "They are great. Without them, these orange shirts can not perform", she said.

Utrecht Mayor Jan van Zanen congratulated the Lionesses on stage. "Individually you were great and as team awesome. Congratulations", he said. "You're inspiring."

In the run up to the celebration many Utrecht residents complained that the Lepelenburg Park is too small for the event. But according to a spokesperson for sports alderman Paulus Jansen, thousands of fans could follow the festivities on big screens around the park. Van Zanen was impressed with the course of the event. "It was a huge operation, but great for Utrecht", he said, according to the newspaper. There were no major incidents - the biggest one was when one attendee had an epileptic attack.

The Oranje women won the European Championship on Sunday by beating Denmark 4-2. This is the first time ever that the Lionesses hold this title. Prime Minister Mark Rutte invited the women's football team for an official reception in The Hague in October. This date was chosen because that's when the first World Cup qualifier matches take place, and it will be the first time the team is back together after Monday's celebration.

PostNL is issuing a special silver stamp to celebrate the European Champions. The stamp has a picture of a lioness and the text "2017 champion". According to the company, the stamp shows "the amazing performance of the untamable football women." The Dutch mint is also issuing a commemorative coin. Collectors can order this coin until Wednesday afternoon.