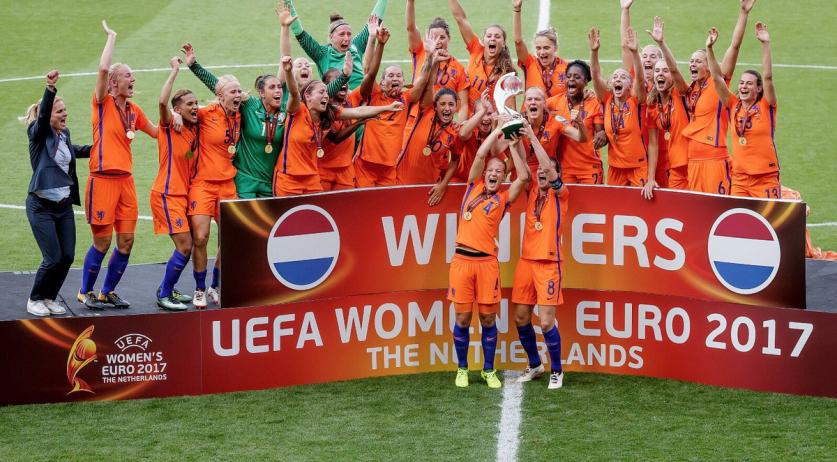 The Oranje Lionesses beat Denmark 4-2 in the finals of the European Championship in Enschede on Sunday, thereby winning the European Cup for the first time ever. The Dutch women's football team was ecstatic by the win.

"This is truly unbelievable", an emotional Vivianne Miedema said to NOS in the Grolsch Veste after the match. "The realization still has to set in, but this is really great."

At half time the teams were tied 2-2, according to NU.nl. But Sherida Spitse quickly scored with a free kick, bringing the Dutch team ahead 3-2. And five minutes before the match ended Miedema, who also scored the first goal for the Lionesses in this match, secured the victory. "In the first half it was chaos. But in the second half we showed how well we can play football", Miediema said.

"This is a dream come true for all of us", attacker Shanice van de Sanden said, according to NU.nl. "In the last game we gave everything and in the second half we were also much better. I'm really proud of al these girls."

Lieke Martens was named player of the tournament. The 24-year-old left-winger from Limburg praised her team's performance. "I felt good during the EC, but I did not expect this. Without my teammates and staff, I could not have reached this. I'm so grateful to everyone", Martens said to NOS. "We fought like lionesses on the field. There may have been some mistakes. But we kept fighting. Wow!"

The four largest newspapers in the Netherlands are full of praise for the Oranje women's performance. "Phenomenal", reads newspaper AD's headline. The Netherlands can be proud of Oranje, thanks to the Lionesses, according to the newspaper. "The Netherlands is rightly the European champion."

"A commercial for women's football", is what the Volkskrant had to say about the win. The Telegraaf cited Lieke Martens in its front page headline with "fought like lionesses". A photo of a beaming Martens is also present in most of the papers, though Trouw, like Martens herself, praised the collective effort.

The Oranje Lionesses will be honored in Utrecht on Monday evening. The team will get onto a boat at Sterrenwacht and sail over the Stadsbuitengracht to the Lepelenburg Park, according to RTL Nieuws. There they will take the stage to celebrate with the Oranje supporters. The ceremony will be broadcast live on television between 6:00 p.m. and 8:30 p.m.

The municipality of Utrecht advises visitors from outside the city to use public transport to get there. The Lepelenburg will be closed to traffic and parking is hard to find in the area.