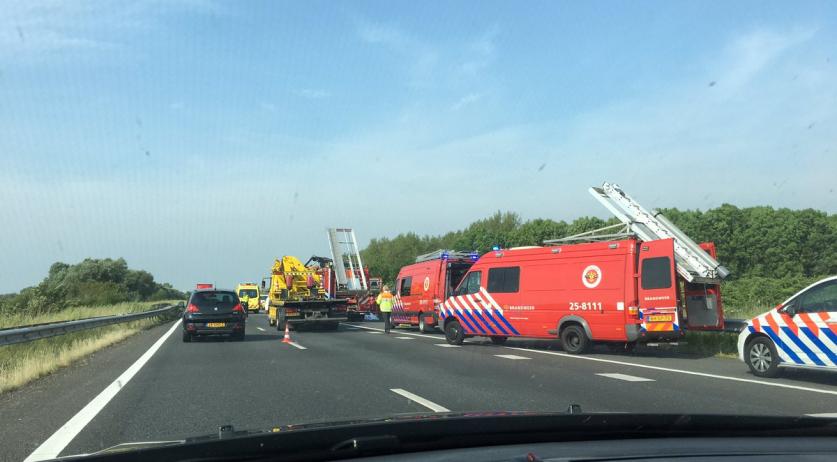 A total of four people were killed in a number of serious traffic accidents in the Netherlands on Monday morning. Three people were killed along the A6 towards Muiden when their car ended up in the water. And a cyclist was killed in Breda when she was hit by a truck. A toddler in a trailer on the bicycle survived unharmed.

The accident on the A6 happened near Lelystad, at the height of Almere-Buiten-Oosten, according to Het Parool. All three victims were in the same car. It is unclear how the car ended up in the water. Emergency responders were unable to save the lives of the three people in the car.

Two lanes on the A6 from Lelystad are closed while the investigation into the accident continues. A traffic jam is piling up behind the scene of the accident. Traffic information service VID expects the investigation and cleanup to take several hours. VID advises motorists traveling towards Amsterdam to do so by taking the Emmeloord junction and following the Zwolle and Amersfoort signs, according to Het Parool.

The accident in Breda happened on Academiesingel on Monday morning. A woman on a bicycle was hit by a truck. She died at the scene. A little girl of around 4 years old was in a trailer towed by the bicycle. She sustained no physical injuries in the accident.

The truck driver was arrested, as is standard procedure in all fatal accidents, a police spokesperson said to RTL Nieuws. It is unclear whether the child was the woman's daughter. The police are still trying to get in touch with the woman's family.

A truck crashed into a traffic jam on the A326 near Wijchen around 9:00 a.m. on Monday, according to the Gelderlander. Three people were injured and at least four cars were damaged. One victim was rushed to the hospital in serious condition.

The A326 towards Nijmegen is closed completely at Bergharen. The police are investigating the accident. Public works council Rijkswaterstaat expects that the highway will only open after noon. Morists are advised to take alternative routes.