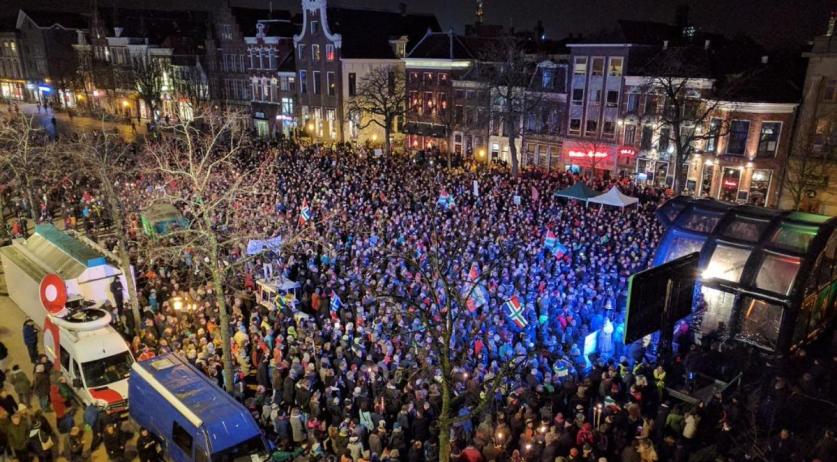 Thousands of people participated in a torchlight march through the city of Groningen on Tuesday as a protest against the Dutch government's policy on gas extraction in the northern province. Organizers estimate that about 4,500 people joined the march. The protesters want gas extraction to be further reduced, preferably to zero, and earthquake damage to be compensated, NU.nl reports.

The municipality of Groningen is also lobbying to have a new international climate institute built in the city, according to NRC. On Monday State Secretary Sharon Dijksma of Infrastructure and Environment announced that the new Global Center of Excellence on Climate Adaption will be housed in the Netherlands. The municipality believes that the government "owes it to Groningen" to base the center in the north to compensate for the damages caused by  gas extraction in the province.

The torchlight march started in the Vismark, proceeded through the city center and ended in the Vismark again. At the end of the march, a manifesto was handed to the Commissioner of the King in Groningen.

With the protest Groningen residents want to show that their patience is at an end, one of the organizers Dick Kleijer said to NU.nl. Many residents believe that gas extraction leads to financial damages and increased safety risks in the form of fracking earthquakes. The earthquakes damage homes and cause a feeling of insecurity among local residents.

The turnout for the march was much larger than expected. The organizers had to double the number of torches to 3 thousand to make sure that as many people as possible have a torch to carry. According to Kleijer, the mayors of almost all cities and towns in the province participated in the march.

Gas extraction is also falling out of favor in other parts of the Netherlands. Dutch bank Rabobank announced last week that it will no longer finance companies that drill for gas in the Wadden Sea.