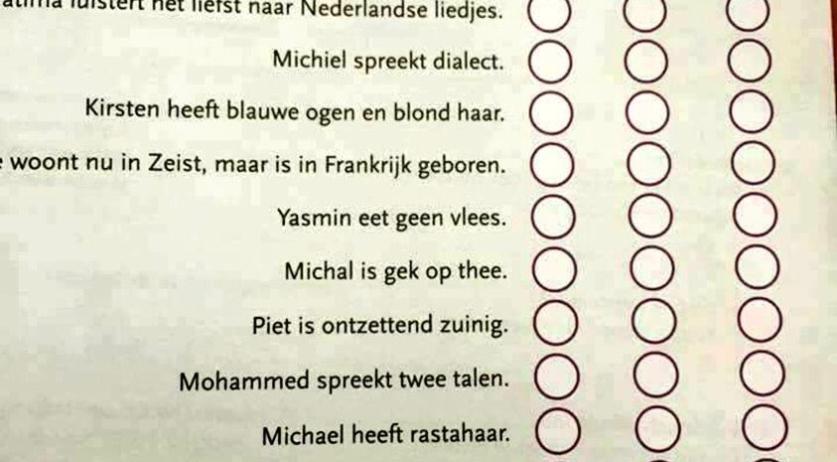 A school assignment for primary school kids in group six caused quite a commotion on social media. The assignment gives the students short statement on the basis of which the kids have to determine whether someone is an "autochtoon" (native Dutch), "allochtoon" (someone with at least one non-Dutch parent) or could be both. According to critics, the assignment is "stereotype-confirming", RTL Nieuws reports.

The assignment includes statements like "Piet is very frugal", "Fatima prefers to listen to Dutch songs" and "Jefte has a great sense of rhythm". The discussion started when Defano Holwijn, better known as Meester Bart, posted a photo of the assignment on Twitter, asking publisher Malmberg exactly what the intention of the assignment is.

A spokesperson for Malmberg said that the assignment is an exercise in vocabulary, according to RTL. "Classically the students are first given an explanation of the terms 'allochtoon' and 'autochtoon' in class and must then complete the final exercise." she said. According to the spokesperson, the answer to almost all the statements is "can be both". Only with the statement "Laura lives in Rotterdam and was born there" is "autochtoon" the correct answer. And with the statement "Pierre now lives in Zeist, but was born in France" is "allochtoon" the right answer.

The spokesperson added that the assignment was taken out of context and denies that it confirms stereotypes. "What matters is whether the children can use the concepts correctly."