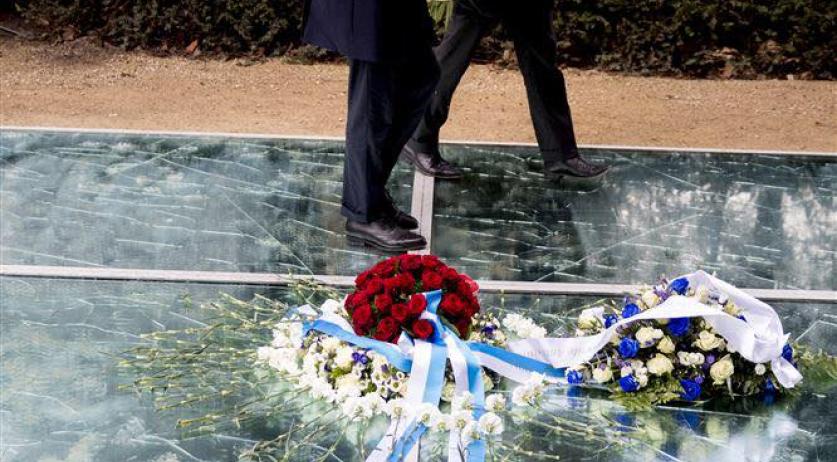 On Sunday Amsterdam remembered the Holocaust, the Nazi persecution of Jews in World War II, with a silent march from city hall to Wiertheimpark, where a commemoration was held. Prime Minister Mark Rutte and Amsterdam mayor Eberhard van der Laan both spoke at the commemoration, ANP reports.

Rutte and Deputy Prime Minister Lodewijk Asscher together lay a wreath ath the monument mirror Never Again Auschwitz on behalf of the government.

"Across Europe 5 million Jews and half a million Sinti and Roma were systematically dehumanized and chased to their deaths, because of who they were. With Auschwitz as an ultimate symbol of mechanical destruction", Rutte said in his speech. "We know it. We know the facts, the injustice, the cruelty. And yet we can hardly imagine the horrible truth. With such a large and unspeakable evil, our understanding - our comprehension comes to an almost standstill. Until the unspeakable becomes speakable. Until the suffering gets a name."

He quoted an Abel Herzberg writing of a few years after the war. "No 6 million Jews were murdered, one Jew was murdered and that happened 6 million times." According to Rutte, that forces us to commemoration. "How else can we understand the past? How else can we give them back their humanity. How else can we remain vigilant in the here and now? For exclusion, anti-Semitism and discrimination are not a thing of the past."

The Prime Minister added that commemoration is necessary. "To do justice to all the men, women and children who lost their lives under barbaric conditions, doomed to remain forever nameless."

Amsterdam mayor Eberhard van der Laan said in his speech that injustice must be fought from the first step, and dignity must be protected until the last. "The Holocaust strengthens our conviction to in our day immediately suppress any form of hatred."

This was Van der Laan's first public appearance since he announced that he is suffering from lung cancer on Friday. He was received with applause from all present.