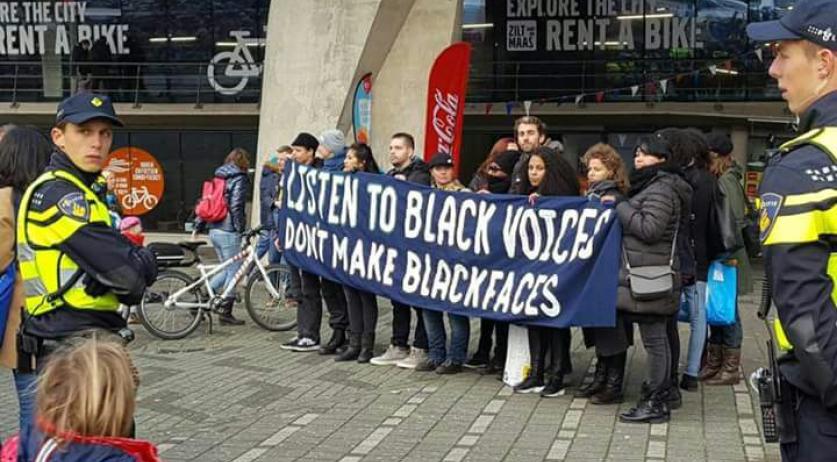 A massive 198 people were arrested in Rotterdam on Saturday for wanting to protest against controversial character Zwarte Piet. Among them were GroenLinks councilor Simion Blom, lawyer Michiel Pestman and activist Jerry Afriyie.

According to newspaper AD, the people arrested belong to action group Kick Out Zwarte Piet. The police stopped the bus carrying the protesters to Sinterklaas' national arrival in Maassluis. A spokesperson for the group told the newspaper that the police told them they could not go to Maassluis, so the group decided to stay in Rotterdam and make a statement on Willemsplein, where many families and children gathered to wait for Sinterklaas.

Many Rotterdam police officers were deployed to Maassluis to help with security surrounding Sinterklaas' national arrival. This meant that there were not enough police officers available to facilitate demonstrations in any other municipality in the Rotterdam-Rijnmond region, including in Rotterdam itself, according to the Volkskrant.

When the Kick Out Zwarte Piet group gathered on Willemsplein, the police therefore decided to arrest them. According to the police, many protesters resisted arrest and the police had to use violence. Simion Blom tweeted from the police station in Maassluis: "Group was calmly walking without any form of protest. Surrounded and arrested. For what? A demonstration that did not exist?"

Most of the protesters were released from custody by Saturday night. Only one man remained in custody. He is suspected of assault for trying to push someone in front of an oncoming car. According to the police, the victim escaped unharmed.

Then national arrival of Sinterklaas happened in Maassluis without much incident. Only one person was arrested for carrying a knife, but was released again after it was established that he meant no harm.

The "new" dark-skinned Sinterklaas was stopped from entering the area where Sinterklaas was to arrive. According to the police, he was not allowed in the area. "The area around the harbor where Sint arrives is an event terrain where only children and their minders are welcome", a police spokesperson said to AD.

Patrick Mathurin, who first appeared as the new Sinterklaas at the national arrival in Gouday in 2014, went to the party with a bunch of red and white roses. "I come for a party with love and friendship, something that makes everyone happy. We will get there together", he said before being told that he was not welcome. After the offical arrival Mathurin did get close to Sinterklaas and exchanged a few words. It is not clear what was said.