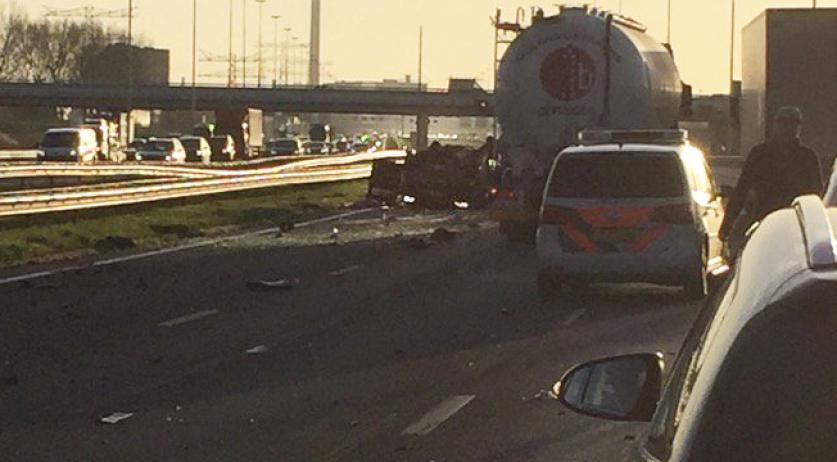 Amsterdam man Neil van der L. was driving an estimated 237 kilometers per hour when he crashed into another car on the A2 highway near Maarssen on December 30th last year, was revealed in the court in Utrecht on Monday. The Public Prosecutor demanded 8 years in prison against the suspect and that his license be suspended for a decade, the Telegraaf reports.  Seven people were in the car Van der L. hit, including three children. The kids' father, 42-year-old Ricardo van Jaarsveld, was killed. Two of the children will remain handicapped for the rest of their lives. Ricardo's girlfriend is still in a wheelchair. Van der L. was under the influence of speed and cannabis when the accident happened. He used speed the night before. "I thought I was pretty normal under it. Apparently not", he said in court on Monday. The morning of the accident he smoked for or five joints at a coffee shop before getting behind the wheel. At the on ramp to the A2, something "snapped" in him, Van der L. said. He stepped on the gas pedal and sped onto the highway, which was crowded with holiday traffic. "I did not have myself under control." he said in court. He feared he would hit the guardrail when the road narrowed up ahead. To avoid a collision, he swerved to the right. Hitting the car in front of him at around 237 km/h without braking. "It was never my intention to cause an accident", Van der L. said. "I hold myself accountable for the death." According to experts in court, Van der L. fell into a psychosis through which he lost all sense of reality. He was completely overconfident. The experts say that Van der L. was completely unaccountable during the accident, but consciously took the speed the night before. The three children's mother and Ricardo's ex was also injured in the accident. She described her family's experience to the court. "During the summer we were not in the pool, but at the physical therapist and bereavement counselor", she said. She described how she saw her kids lying seriously injured in the car, and could do nothing to help them. "Every day I see the scars on their bodies. I see them struggling to walk. How do I explain to you how it is to leave your kids behind in the hospital everyday. The rehabilitation center. How do I explain how it is to see your child kick the habit of morphine? How do I explain how to tell your kids that their daddy, my best friend, died? I have become someone who is constantly scared. Totally dependent on others." Her boyfriend was driving the car when the accident happened and is dealing with feelings of guilt. "Ricardo died in my car and I could not protect him", he told the court. He asked Neil van der L. not to appeal against a conviction.