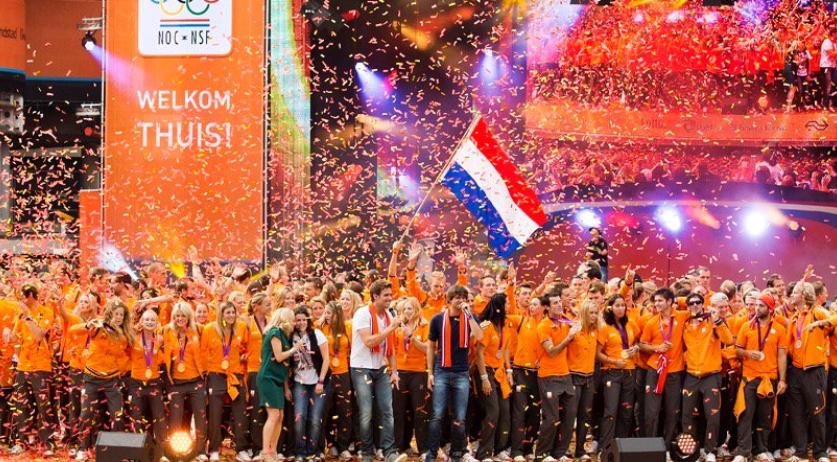 KLM's orange Boeing 777 is bringing the Dutch Olympic athletes back home to the Netherlands today. They are expected to land at Schiphol around noon, Het Parool reports.  After two weeks at the Olympic Games in Rio de Janeiro and an about 11 hours flight back home, the Olympic athletes still have a busy week ahead of them. Immediately after getting off the plane at Schiphol, they will be loaded into coaches and head off to the RAI for a congratulations ceremony and party. Olympic fans are advised not to wait at Schiphol for the athletes, as they will be getting straight onto buses, not even waiting for their luggage. Around 1:30 the Olympians will join the 52 athletes that came home on earlier flights. After a program including singer Nielson and DJ's of Radio 538, the ceremony will be held. According to the newspaper, about 10 thousand are expected to attend. After the ceremony there will be a party with music by FeestDJRuud. And even after the party, the medalists at least still have much to do. The athletes that came home with bronze, silver and gold medals on their chests will be on a special broadcast of RTL Late Night with Humberto Tan, which will screen on RTL4 at 8:30 p.m. On Wednesday the medal winners will meet Prime Minister Mark RUtte at the Ministry of General Affairs at 1:00 p.m., where they will be officially honored. After that they will mount orange bikes for a ride to the Noordeinde Palace, where King Willem-Alexander and Queen Maxima are awaiting them for tea.