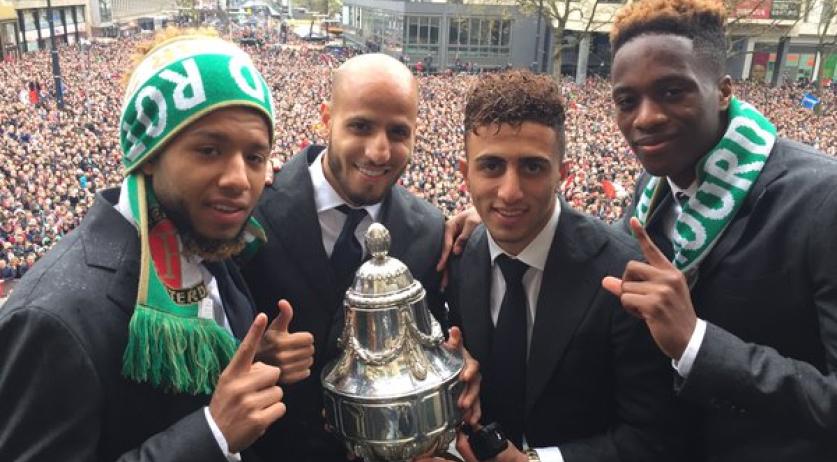 Tens of thousands of Feyenoord supporters, along with the team itself and Mayor Ahmed Aboutaleb, celebrated the Rotterdam team's KNVB Cup victory on the Coolsingel on Monday.  Feyenoord beat FC Utrecht 2-1 in De Kuip on Sunday, thereby winning the KNVB Cup for the first time since 2008. The festivities started around 11:30 a.m., with Mayor Aboutaleb greeting the team in the city hall. The Mayor called the cup a "gift for the city" and described it as "the culmination of a great list of Rotterdam, and it marks the great momentum of Feyenoord in the future", he said, referring to plans for a new stadium among other things, according to the Volkskrant. He also complemented the Feyenoord fans on their behavior during and after the final. After the Mayor's speech, Feyenoord captain Dirk Kuyt and coach Giovanni van Bronckhorst stepped onto the balcony and proudly displayed the cup, to the shouts and cheers of some 40 thousand supporters gathered below and the team's anthem blaring out of speakers in the background. "This is what you do it for. This moment, we'll never forget in our lives", Dikr Kuyt said, according to NU.nl. Van Bronchorst also expressed his joy. "It is fantastic to get this prize in my first year as head coach at the best club in the Netherlands", he said. "I am very proud of my team." The Coolsingel is closed to traffic until 2:00 p.m.