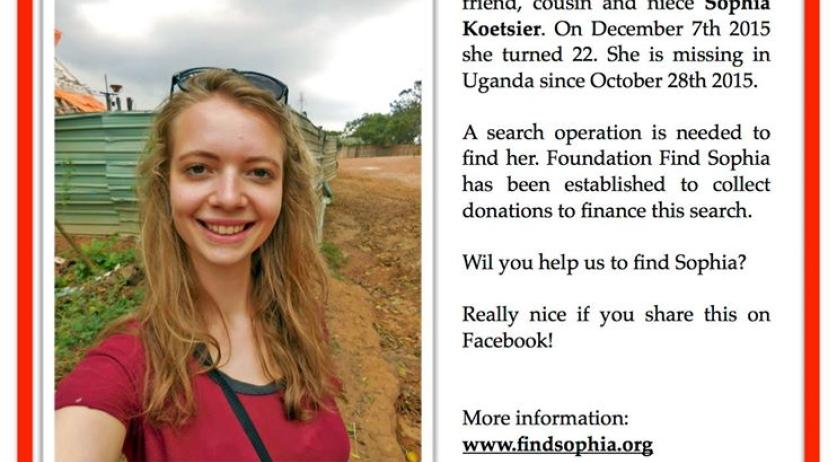 A team of Dutch investigators is heading to Uganda on Monday to search for Amsterdam medical student Sophia Koetsier, who went missing in the African country in October last year. Her parents raised the money necessary for this investigation. Sophia left for Uganda in August last year for a eight week internship in a local hospital. Afterwards she and some friend traveled a bit. She was last seen on October 28th, 2015. the group arrived at their accommodation in the Murchison Falls National Park. Sophia said she was going to the bathroom, and wasn't seen since. According to findsophia.org, a foundation set up to raise money for the search, several park rangers launched a search party within 15 minutes of her disappearance. The only trace of her found was a water bottle and some scraps of clothing. Though there is no physical evidence that she was attacked by wild animals or entered the water, according to the foundation. The team will search in areas where the local authorities did not, forensic pathologist Frank van de Groot said to broadcaster NOS. "In Ugandan terms, Sophia was carefully sought for, but it was quickly assumed that she fell into the water and therefore other scenarios were not properly considered." This new investigation will look into all possible scenarios. "The parents of Sophia still know nothing and they have many questions. The cling to the hope that their daughter might even still live", Van de Groot said to the broadcaster. According to newspaper AD, the investigative team going to Uganda is the same team that searched for missing friends Kris and Lisanne in Panama.