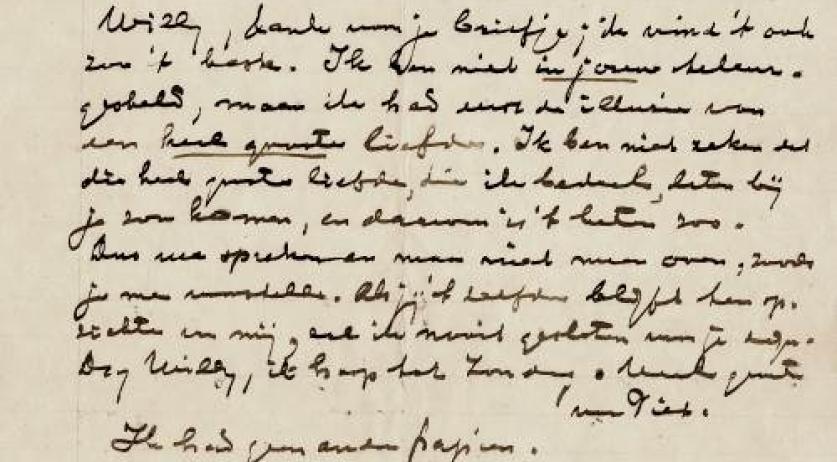 The Netherlands Institute for Art History recently acquired a extraordinary collection of letters written by Dutch artist Piet Mondrian. Mondrian wrote these 22 letters to his girlfriend Willy Wentholt between 1918 and 1923, the Institute announced. A selection of the letters is on view to the public at the TEFAF until Sunday. Wentholt was a French teacher in Amsterdam. She and Mondrian met each other during the First World War. They took dance lessons together. According to the Institute, these letters show a previously little known side of the Dutch artist. "The letters reveal that Mondrian and Wentholt's relationship was more than just an 'ordinary' friendship", the Institute writes. "For instance, Mondrian writes candidly about his perception of ideal love between a man and a woman - one that would ultimately be denied him and Willy." The artist never married and very little is know about other women in his life. The letters also offer a glimpse into other aspects of the artist's daily life in Paris, including visits from friends and acquaintances as well as his thoughts about developments on the dance floor. "They also convey his sense of isolation as an abstract painter in Paris" The letters are part of a larger archive that the Institute bought from Cis Heijdenrijk-Osendarp who, with her husband, founded the Mondriaanhuis in Amersfoort.