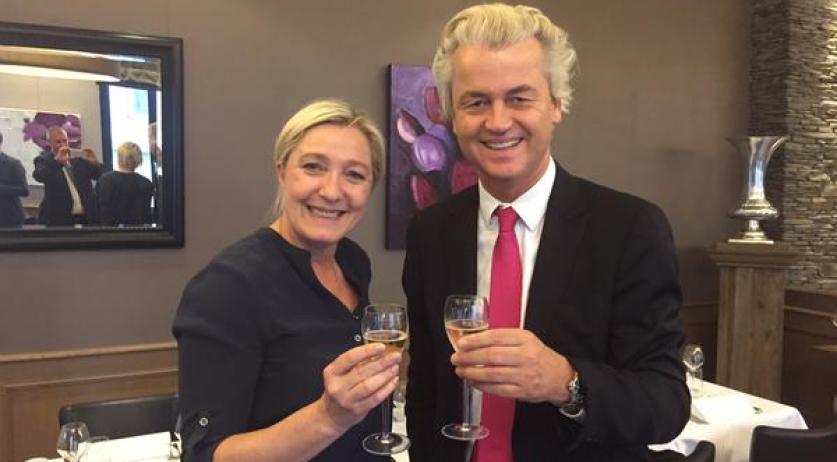 Update, 14:20, 29 Sept. 2015: Polling agency Gfk released a poll of over 2,200 people suggesting the PVV would win 34 seats if the election were held today. VVD would drop to 23 seats, and PvdA to 11 in the Gfk survey.  If a general election were held this week in the Netherlands, anti-Islam and anti-refugee party PVV would sit atop all others with 30 seats in the Tweede Kamer, the lower house of Dutch parliament. That would mark a doubling of their current contingency, at the expense of the ruling right-left coalition of the VVD and PvdA (Labour) parties, Dutch pollster Maurice de Hond revealed this week. The coalition parties would lose 21 and 28 seats respectively, bringing them down to 20 and 10 seats. Still, it is a one-seat improvement on last week’s results for the Labour party, which has faired poorly with even its most ardent supporters since the coalition was formed. The PVV improved one seat on last week’s tally, when party leader Geert Wilders repudiated the Netherlands for accepting refugees and opening its borders to, what he called, an influx of bearded men who want to destroy western civilization. He was heavily criticized by other party leaders for his manner of speech. Wilders is likely to go on trial next year for allegations of criminal hate speech and inciting violence against religious and ethnic groups. Austrian authorities investigated the PVV leader this summer for similar complaints. Nationalist party VNL lost a seat compared to last week’s results, as did 50Plus. Other parties that are polling well include the socialist party, SP, which would gain four spots to 19 seats, leftist green party GroenLinks which could take ten more seats to 14 total, and the centrist CDA and D66 which would improve by 8 and 5 seats to 21 and 17. It could open the door for a left-center coalition of the PvdA, SP, GroenLinks, CDA and D66, which would combine for 81 of 150 seats. A right-centre coalition also involving the CDA, but with the VVD, PVV, and ChristenUnie would total 77 seats.