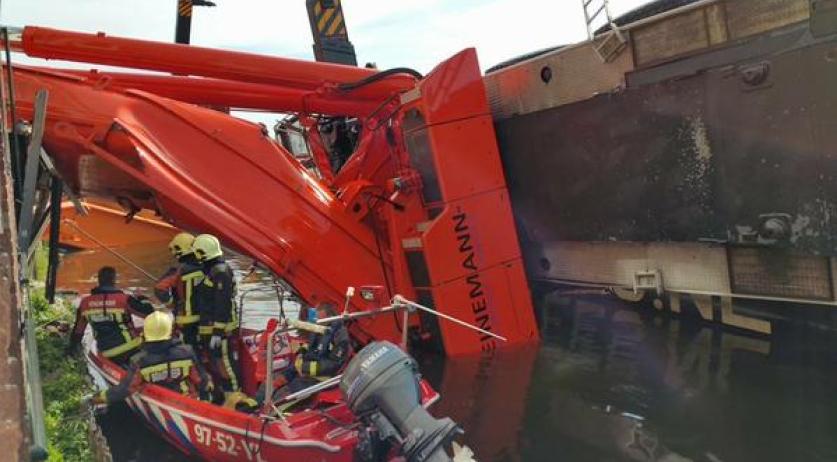 The three people who were identified as suspects in connection with the crane collapse in Alphen aan den Rijn on Monday, are no longer considered suspects. Experts agree that the accident was preventable. Press prosecutor Richard Joeseof Djamil announced at a press conference on Tuesday afternoon that the three people are no longer considered suspects because no one died in the accident, AD reports. He further sated that the criminal investigation can only be started once the situation is safe. "The first priority was the victims. The investigation should reveal whether someone can be blamed for what happened. This investigation may take some time." A number of construction and crane experts definitely think that someone can be blamed. On Tuesday crane expert Richard Krabbendam called the crane operators "very unprofessional and ridiculously amateurish", adding that the operation was "doomed for failure".  “Too much risk was taken and bizarre decisions were made.” Jan Zwagerman of the hosting company of the same name told NOS Radio 1 Journaal that all those involved should never have approved the lifting plan because the approach was irresponsible. According to him, the crucial mistake was that the used cranes were not suitable for placement of pontoons. "These cranes are rudderless when the ground is not level. Then the operator can no longer correct the crane." He attributes this to the financial situation in the industry. "Due to a shortage of assignments, machines are deployed in a way that they can't work." Frans Bijlaard, professor of Steel Structures at TU Delft, told the broadcaster that things went wrong that should not have been allowed. "At the very least no account was taken of the possibility that it could go wrong. Otherwise the houses would have been evacuated when the job began." At Tuesday afternoon's press conference, Alphen aan den Rijn Mayor Liesbeth Spies said that the situation in the city is still unstable after the accident. Residents of 15 homes can not return to their homes as a precaution. "Motion and instability are still being detected around the pontoons. Therefore it can not be switched down to a lower grip level. We can't make the area where the emergency decree has been issued smaller." Construction company Mourik, who is responsible for the renovation of the Juliana Bridge, also had a press conference on Tuesday. Drector Jaap Kruijt said that the company will give money to the people affected by the accident, AD reports. This involves first aid of 2 thousand euros per home and 5 thousand euros per store. The company will work with the municipality to find out who is eligible for compensation.