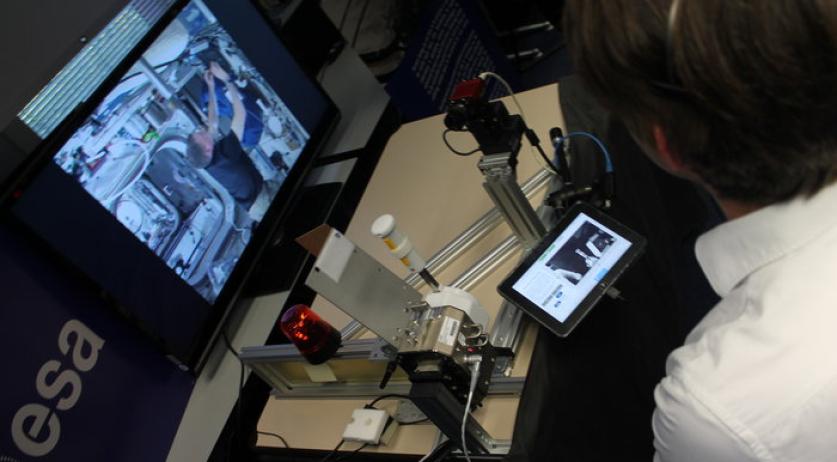 Astronauts in space “shake hands” with ESA team on earth

An astronaut on the International Space Station made history yesterday when he "shook hands" with a European Space Agency team member on the ground in Noordwijk, Zuid-Holland through joysticks installed both on the ISS and in the space center. Terry Virts, an astronaut with NASA, used a haptic-feedback joystick while in orbit to share the handshake with Dr. André Schiele, an engineer working with the European Space Agency and TU Delft in the Netherlands. "Terry was testing a joystick that allows astronauts in space to ‘feel’ objects from hundreds of kilometres away," the ESA noted. "The joystick is a twin of the one on Earth and moving either makes its copy move in the same way." The joysticks are synchronized to twin the movements of one another. The technique has a practical application in exploration of Mars. Astronauts orbiting around the planet can operate unmanned rovers on its surface. By using the twinned joysticks, astronauts can conduct basic physical operation with the rover on the planet's surface.

“The system worked even though the Space Station was flying over 5,000 km away,” Schiele said. “It felt as though Terry was extending his arm down from space to shake my hand.” In order for the procedure to be successful, the signal between joysticks has to travel exceedingly fast. The signal was sent from the ISS to the Noordwijk location via a relay satellite at an altitude of 36,000 kilometers, and Mission Control in Houston, Texas. Currently, it takes the signal up to 0.8 seconds to cover the distance in either direction. It was not the first use of the joystick in space. NASA astronaut Butch Wilmore tested the device before it was linked with its twin joystick on earth.